Blood For The Blood God!

Greetings fellow wargamers! This was a fun project Whiskey Priest organized last year but I never got around to blogging about it. I was organizing my hobby room and finally got my act together and took some decent pictures. 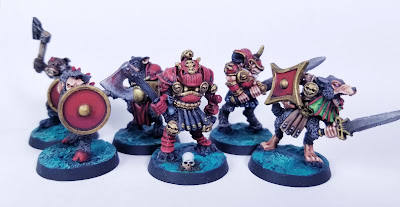 A group of us agreed to roll up warbands using the rules from Slaves To Darkness and we would meet up to play a one day campaign at Warhammer World before BOYL started. There was a bit of fudging involved largely due to the lack of zoat and squat miniatures, but everyone generally stuck to the warband creation rules. A RoC game is impossible to balance so it's all about the rule of cool and having a good time. 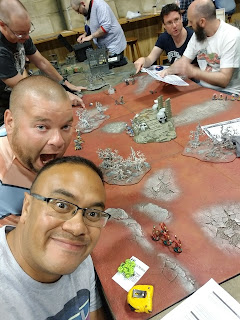 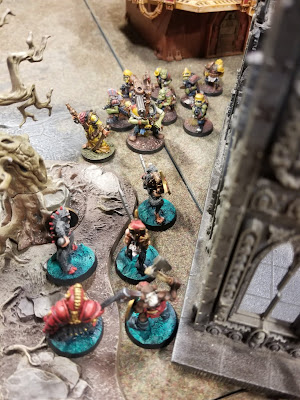 My Beastmen about to get swarmed by Aiteals Orks

After rolling up my champion, I rolled up some renegade imperial army, beastmen, renegade marines, and an Ogryn. Initially I wanted to build my warband using miniatures I already had, but after rolling up Bestial Face and Mace Tail, I knew I would have to pick up some Khorne figures and go all in for The Blood God! 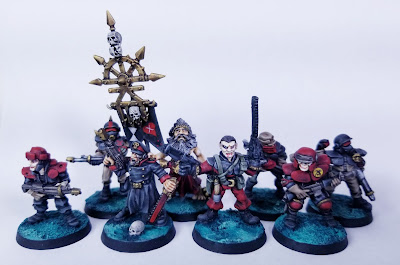 My Champion Growly McRageface is a human hero with Chaos Armor, Bestial Face (+1 Attack) and Mace Tail (+1 Attack at +1 Strength) and my favorite... Uncontrollable Flatulence!! This attribute was hilarious during the game. I equipped him with a plasma pistol and a chainsword for extra fightiness! As I was rolling up the warband, their background story started to unfold. Growly McRageface was once the commander of a proud Imperial Army regiment, decimated by war and abandoned on a planet wracked by war, left to fend for themselves. Their martial pride and lust for battle quickly replaced their faith in the Emperor and they quickly turned to worship of Khorne. The warband is all that remains of the army regiment and their abhuman cohorts. 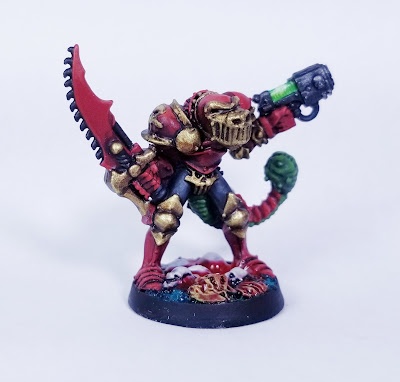 I had a really fun time putting together the Renegade Imperial Army squad led by a commissar. The Commissar didn't have a special stat line but including the figure really adds to the character of the unit. The beastmen were also fun to paint and required almost no conversion work. I picked up a small group of World Eaters on Ebay, which were a real treat to paint. 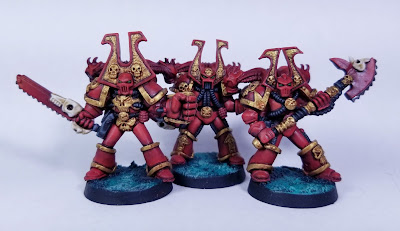 My favorite miniature in the whole warband is the cyborg Ogryn Bodyguard, Dumm Pigfist. Dumm Pigfist has been blown up and had body parts replaced so many times that very little remains of the once loyal and steadfast bodyguard. Dumm's left arm was replaced with a beamer and he is little more than a poor man's dreadnought. 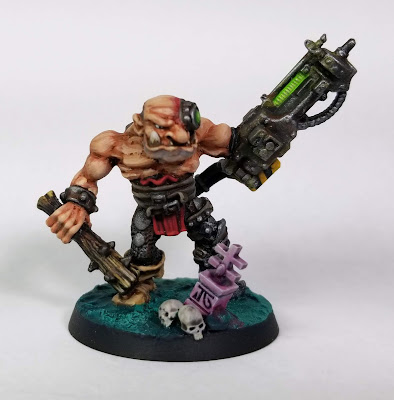 Thanks for looking! If you ever get the chance to roll up a warband you really should, it was a great time!

Posted by Bulldoglopez at 6:14 PM