A squad of absolute badasses. It's a Festivus miracle!

Short quickie post just to show off the latest addition to Inquisitor Serpico's force of jackbooted Imperial thugs! I present to you... Copplestone troopers! Yeah, they have arms and autoguns courtesy of Victoria Miniatures. The resin arms fit snugly with some minor greenstuff work and minimal frustration levels. I also threw in a Forgeworld flamer and a Chainsaw Warrior to give the squad a heavy weapon.

They're painted up to match troops that make up an Imperial Army detachment. I was going to go with the "codex grey and black" uniform scheme, but I like the end result and it's more colorful but still militaristic. Since it's getting close to the end of the year, I may as well do a year in review and touch on some projects i've got on deck.

What a mixed bag this year has been! It's been a real shit-fest in the real world and I really hope we don't have a nuclear war on our hands in the next 12 months and maybe some of my favorite artists and celebrities can make it through 2017. Jeez.

Alright bitching is done. It's been a banner year for Oldhammer! Loads of killer kickstarters out there, I got to roll dice with some fellow New-Worlders and we managed to add a few more to our collective. Hobby-wise I've had a great year and i'm looking forward to getting together with some of the New World crew again in January.

Having so many meet-ups this year gave me the chance to test out all kinds of house rules for Rogue Trader, which resulted in the super fun Rogue Ops house rules!

I've been working on a campaign system for Rogue Trader/Rogue Ops which draws heavily from Necromunda, Mordheim, and Inquisitor. With Rogue Stars being all the rage these days, I'll probably end up plundering those rules for goodies. I've said it before and I'll say it again. Rogue Trader is the only fucking ruleset you will ever need. Add some house rules here and there and you can make it be whatever you want it to be. I hope to have some rudimentary campaign rules done by the end of January, hopefully in time for NOVAOSGROT 17 - THE premier Oldhammer USA event-of-the-year -OF-THE-YEAR. Be there or be square, you lame-ass lame-butts!

I've loaded up on holiday ebay deals that should keep me busy all year and should see my RT pirate force grow. The infamous Worldburner will be adding more Squat Mercenaries to his outfit and the Ork warband continue to grow. 2017 is shaping up to be another great year for Oldhammer!

Posted by Bulldoglopez at 4:12 PM 4 comments:

Subterfuge in the 41st Millennium

So those of you who also follow Give'em Lead know that BlueinVT and I just spent a weekend in AirborneGrove26's basement in the US Midwest playing wargames and generally devolving into teenage boys. So the four day basement fest included games of 3rd edition Warhammer Fantasy Battle, Rogue Trader, Heroquest, and other assorted nonsense. One thing I had really been looking forward to was trying out some house rules that had been bouncing around in my head for a few months and I think the results were just super fantastic. I call the rules "Rogue Ops" 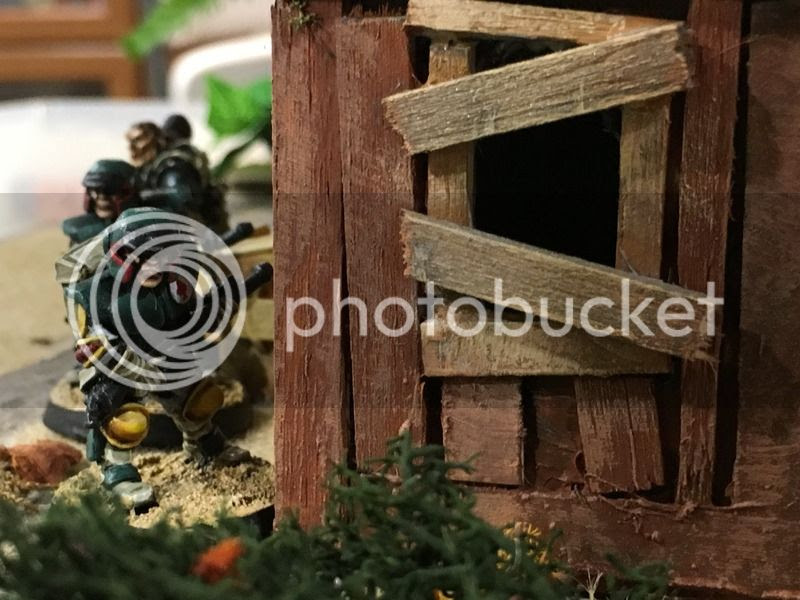 The big news from Games Workshop and a dream come true for us old veterans of the tabletop space wars was the release of the brand new Genestealer Cult line and rules. Yaaay!! Woo! Welllll... I haven't bought any of the new stuff and I probably won't. I left the modern version of the game behind a while ago. While the new figures are everything I could have wanted and more, I guess i'm just too much of an old lead head. After all, my Genestealer Cult has been marauding around the Oldhammer World for a couple years now... and i'm not done yet! And so, without further delay, I bring you the latest additions to the cult!! 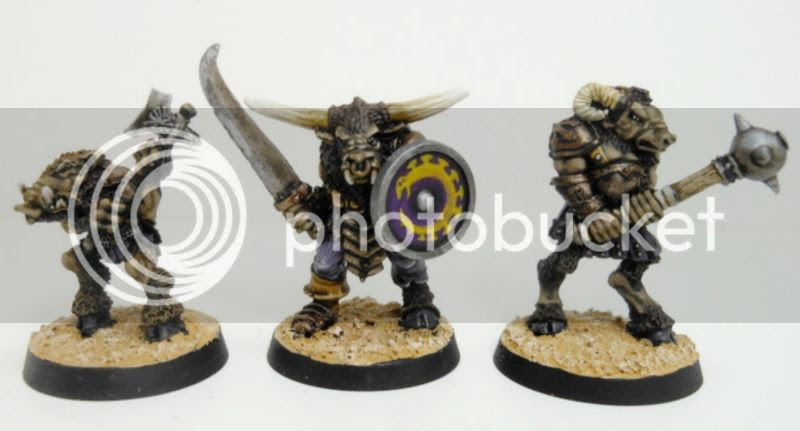 Radio Silence (And some Rogue Trader)

So... sorry for not posting in two months. Nothing crazy going on, just lots of work and I decided to spend my spare time painting and modelling instead of blogging. I've been working on an Epic scale force and plugging away at some non-Oldhammer related hobby stuff.

Sadly I won't be able to make it to USA Oldhammer day this year due to work obligations, but I did make it to Historicon and another Oldhammer Basement Bash and got a few Rogue Trader games in. Also, i'm looking forward to getting an Epic force put on the table. I said I would never do it. I said " I don't need those, I have these ones already" Well... turns out i'm a liar. I did it... I succumbed to the call of monopose lead space orks from the 80's. And so, without further ado, I present Thrugg Bullneck and gang.

Genesis of a Scoundrel


"Abdul Goldberg has crossed you for the last time-it was pure luck that your paths should cross on this isolated planet outside of imperial control. He and his crew are relaxing down at Greasy Kim's Bar and Diner, unaware that you and your crew are ready to pounce. The Diner is mostly deserted, with only a few lonely vac-heads and spacers to witness the fight."

And here we are, boys and girls... ABDUL GOLDBERG: SPACE PIRATE 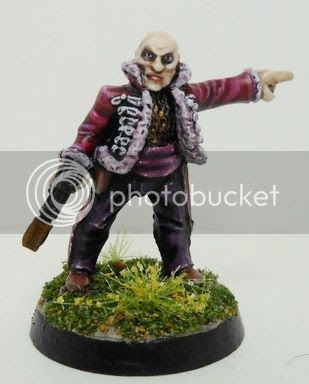 Would you like to know more?? »
Posted by Bulldoglopez at 7:37 PM 9 comments:

Would you like to know more?? »
Posted by Bulldoglopez at 6:00 PM 8 comments:

There comes a time in every Oldhammer blogger's blog life when one of these posts becomes obligatory.


I know what you're thinking. You're thinking: FUCK. YOU. But bear with me.
Would you like to know more?? »
Posted by Bulldoglopez at 6:21 PM 15 comments:

LaserGun Fight at the Combat Burgers...

As some of you may have already gathered based on whats been floating around the Oldhammer Social Media and Blogosphere the last few days, a couple of us New World boys had a little get together. That's right.. THE SECOND ANNUAL NORTHERN VIRGINIA AND OTHER STATES REGIONAL GRAND OLDHAMMER TOURNAMENT!! Otherwise known as NOVAOSGROT!!!

BUT THIS IS A BATTLE REPORT! I'll write about the event later, let's talk about some fucking Rogue Trader! (I swear I live for this shit). 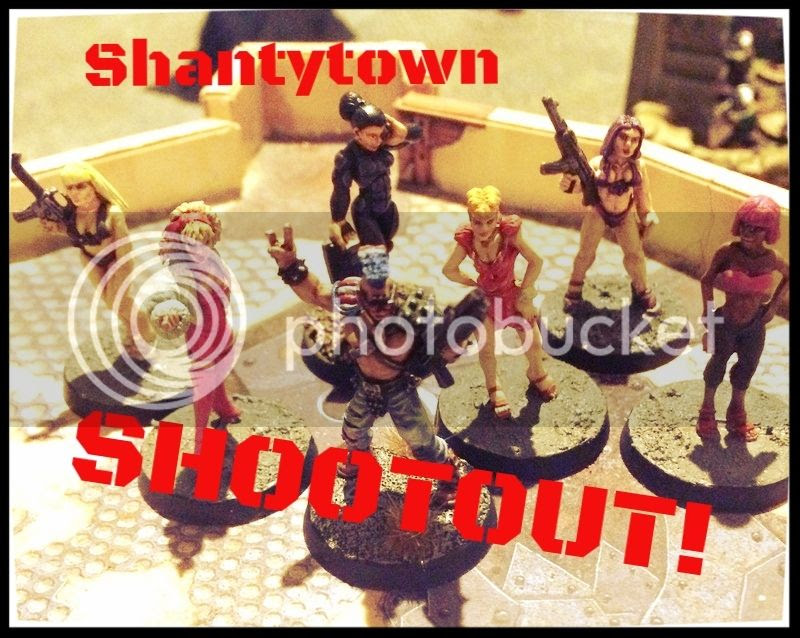 Would you like to know more?? »
Posted by Bulldoglopez at 9:02 PM 6 comments: