All of my pirates and mercenaries are scoundrels, but they're more in the vein of the lovable rogue like Han Solo or whatever that character's name is that Animal Mother played in Firefly/Serenity. Abdul Goldberg has to be something else. I imagine him being kind of a cross between Harry Mudd and a Dick Tracy gangster. He's a con-artist but he's also violent and dangerous, maybe whatever a crime syndicate kingpin would be about three-quarters of he way up the crime lord ladder. 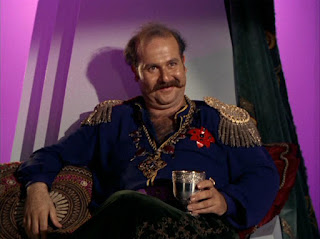 For inspiration I'm totally stealing from Whiskey Priest again, but he did a great post on Goldberg a while back that is worth re-reading, also Symphonic Poet featured a Goldberg-esque character on his blog. So I guess it's now or never.

We're having an Abdul Goldberg contest over at Emporium of Rogue Dreams and I wan to document the whole project here on the blog. The competition calls for a back story and a model to be submitted by the end of May, which I think is totally achievable.

My idea is to have a guy who really evokes Harry Mudd's weird over the top, tin-pot dictator fashion while still making him look like he can hold is own in a gun fight. I also want to have him equipped in a way that matches his character. So far that was the easiest part. Here's what I came up with:

I'm also considering the possibility of him being a low level psyker. Nothing too obvious, but just enough so that it compliments the con-man aspect of his character. I feel like the shuriken catapult makes him dangerous on the table and gives him an exotic look.