Nefarious alien pirates have kidnapped a local planetary governor's daughter! Rival groups of mercenaries and bounty hunters have been scouring the sector in hopes of collecting the reward. Two groups have tracked the pirates to the isolated forest moon, Sigma Arborius Ubiquiae. Is the governor's daughter still alive? How many rival pirates will they encounter? What dangers await them in the forest? There was only one way to find out.... 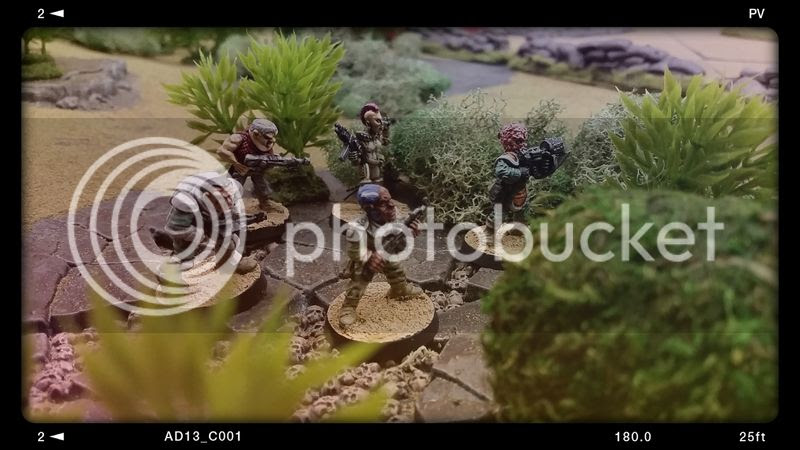 space scum trudge through the alien forest.... on the hunt

Situation: Bounty Hunters were able to track the alien pirates to track the aliens to the forest moon Sigma Arborius Ubiquiae. Orbital reconnaissance drones located a suspected camp site and identified biological activity congruent with known alien bio-scans. The camp is located in densely forested area far away from ideal shuttle landing zones. Although the alien forces are thought to number less than a dozen and are believed to be lightly armed, a direct attack could prove to be disastrous if the aliens decide to kill their hostage. The best way to attack the camp was to infiltrate the area by foot and try to beat any other rivals to the objective. Venko Fett passes by a section of old shuttle wreckage

The camp is situated in a low lying area of the forest. Large trees had been cleared to make room for landing small shuttles and living space, but the forest grows quickly and there is heavy brush and undergrowth to cover an approach by foot. The camp is most likely one of many cache sites used by this group of pirates. Reconnaissance drones have also identified what appears to be sections of old shuttle wreckage.

Forces: The battle consisted of three forces: A band of pirates under the command of the notorious Two-Gun Jones, a detachment of Imperial troops led by Alexis Yarvin, and an unknown number of alien troops commanded by the GM.

The players commanded detachments of about a dozen troops each and entered the board from opposing edges. Orbital reconnaissance has identified three buildings in the camp which the players will have to search for the hostage. Alien forces do not start on the table - they are either hidden or located inside the buildings. Players would roll off each turn to see who takes top of the turn. The Imperial Troops also had the secret objective to capture the alien or mutant known as Cryyplah The Cruel. The Pirate crew had the additional secret objective of investigating the shuttle wreckage. While the primary objective was to rescue the hostage, completing a secret objective also earned the players a victory point. The player with most victory points would carry the day. 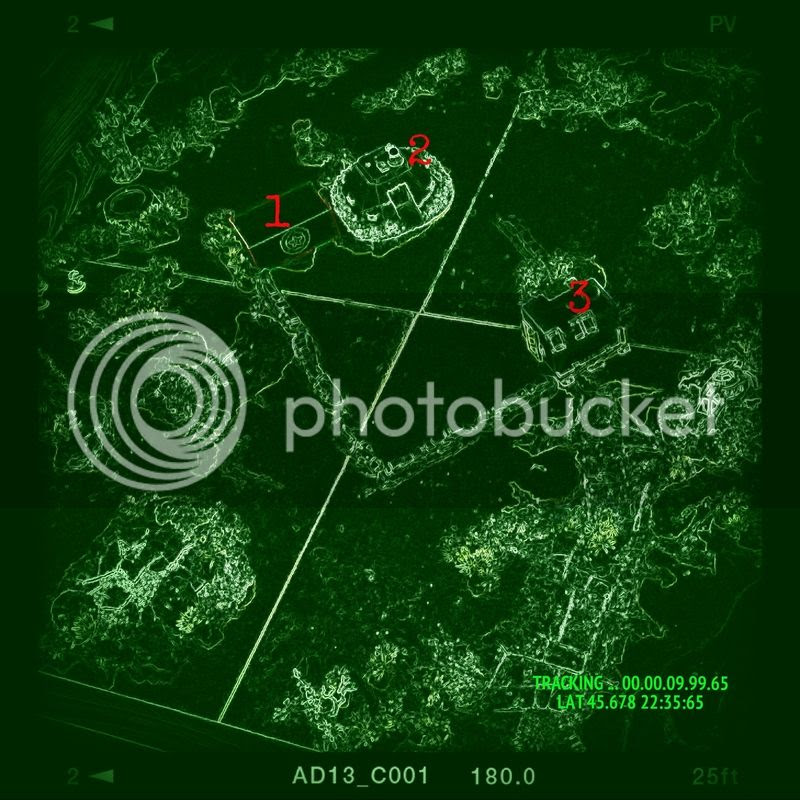 Inquisitor Serpico entered the office of Planetary Governor Piotr Chumlin and noted the look of distress on the governor's face. Sensing the opportunity to expand his influence in the sector, Serpico offered his services to the Governor and insisted that he would not accept the reward if he was successful. The governor happily agreed and thanked the Inquisitor, clearly ignorant of the implications of being indebted to an Imperial Inquisitor. Serpico returned to his ship and met with his lieutenants.

Meanwhile, elsewhere in the sector, the notorious Two-Gun Jones and his crew were hot on the trail of the alien kidnappers. Governor Chumlin offered up quite a tasty bounty for the rescue of his daughter. He would need to locate her quickly before word got out to every two-bit outfit in the sector. They had been following an ion trail for two days when their sensors picked up a small habitable moon. Jones had heard rumors that there were pirate safe houses in this area of space and deployed surveillance drones to scour the planet.... 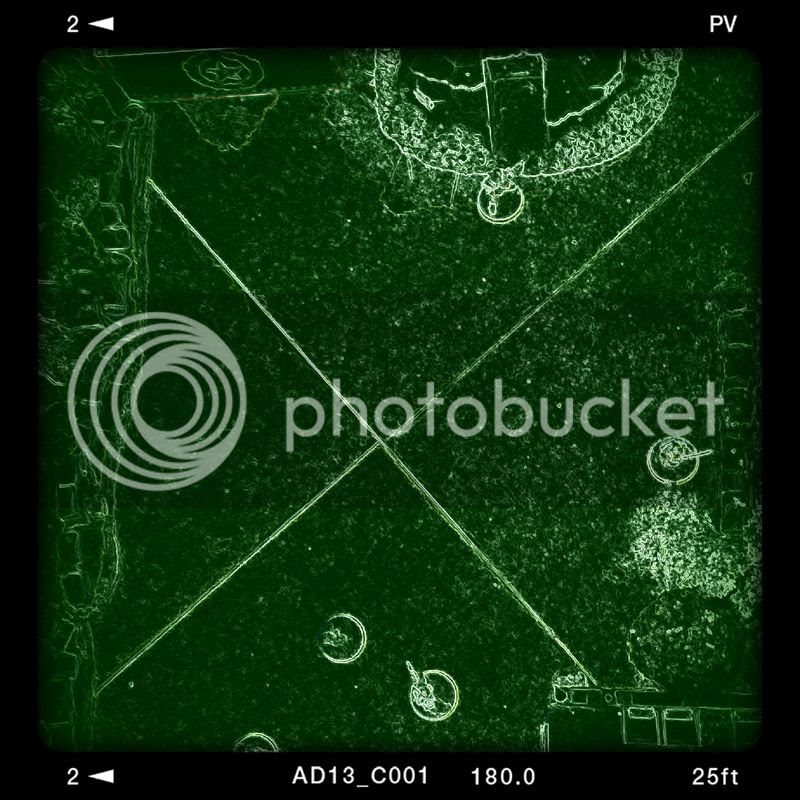 Serpico's ship entered the isolated system and set course for Sigma Arborius Ubiquiae. Interrogating the corrupt customs official had proven most fruitful, but the ship's augury array was picking up the energy trail of another ship. His abhuman tech-priest theorized another ship had also located the forest moon but had either already landed on the moon or was hiding in a nearby asteroid belt. There was no more time to waste. As soon as orbital servo skulls identified a likely objective, Serpico sent a detachment of troops down to the moon led by Alexis Yarvin and the bounty hunter Venko Fett.

They would have to infiltrate by foot. Serpico prepared a detachment of boarding troops in case another group tried to escape the system in a ship and he waited.... 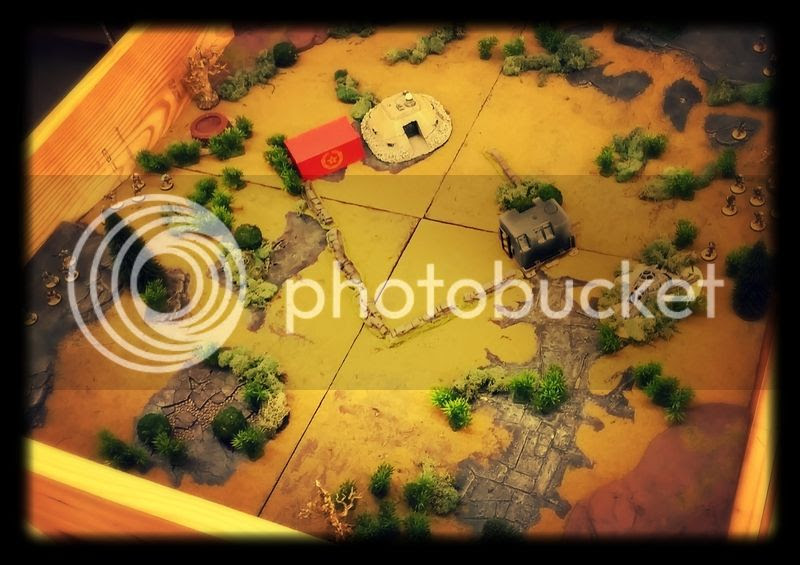 Two days passed before Serpico received a transmission from Yarvin verifying that he had located the pirate camp. Bio scanners indicated that other advanced lifeforms were converging on the same located. Out of the corner of his eye, Yarvin saw Venko Fett putting his helmet back on. His communicator buzzed "Someone else is here. I can hear them." 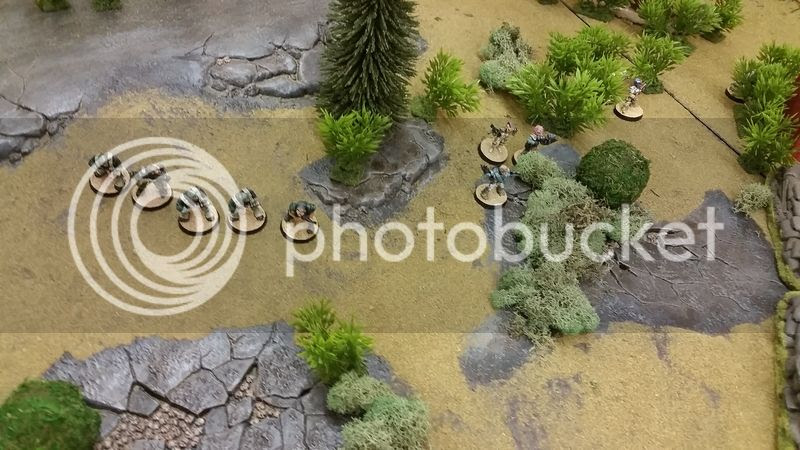 Two-Gun Jones and his pirates advance with caution 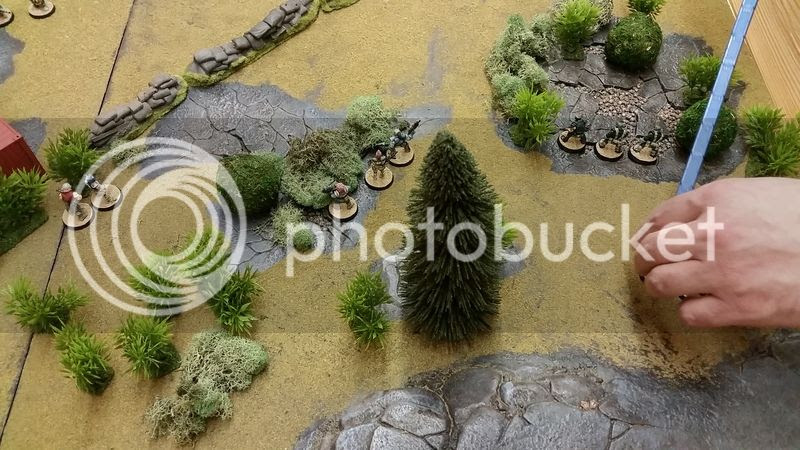 The callous hand of fate directs the pirates movement

Both sides took turns advancing towards the camp, taking advantage of the dense foliage to get as close as they could to the camp and observed two Squat sentries emerge from building 2 to begin what appeared to be a routine patrol. 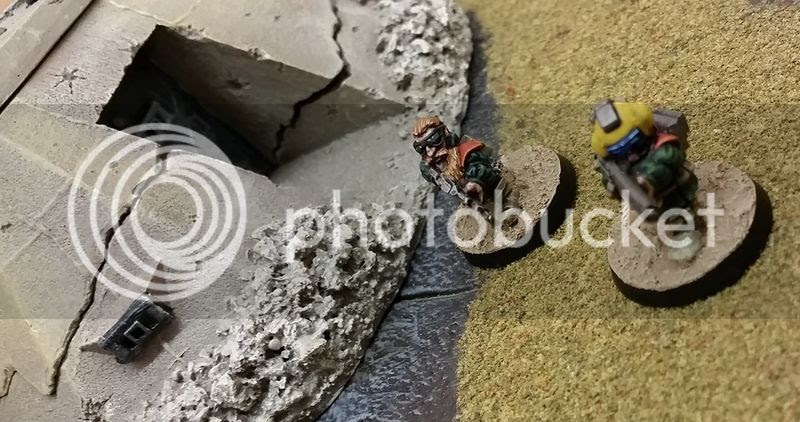 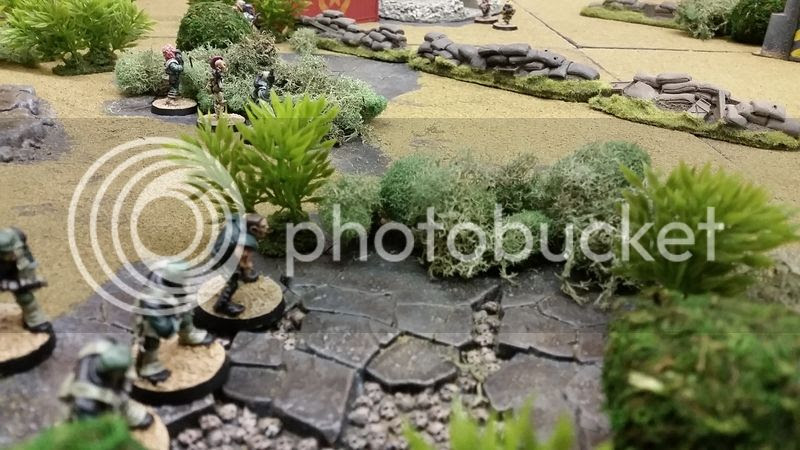 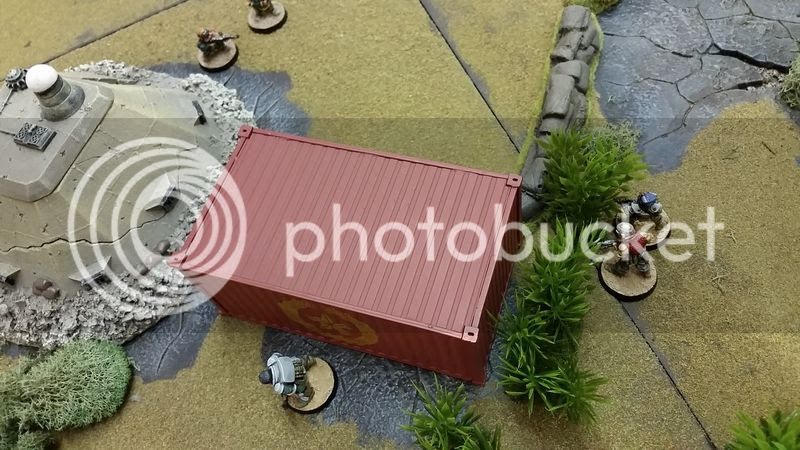 Blaster Harris sneaks around the side of the camp

The silence was broken when a rowdy group of pirates began hurling insults and shouting from their hiding place. Jones cursed in irritation and signaled Blaster Harris to start making his way around the side of the camp. The rowdy pirates were rewarded for their impatience with an imperial grenade. Luckily the grenade was wildly inaccurate and the sender was probably firing blindly at the sound. The explosion raised the alarm in the camp and Squat pirates started pouring out of the buildings and took position along their sandbag walls. 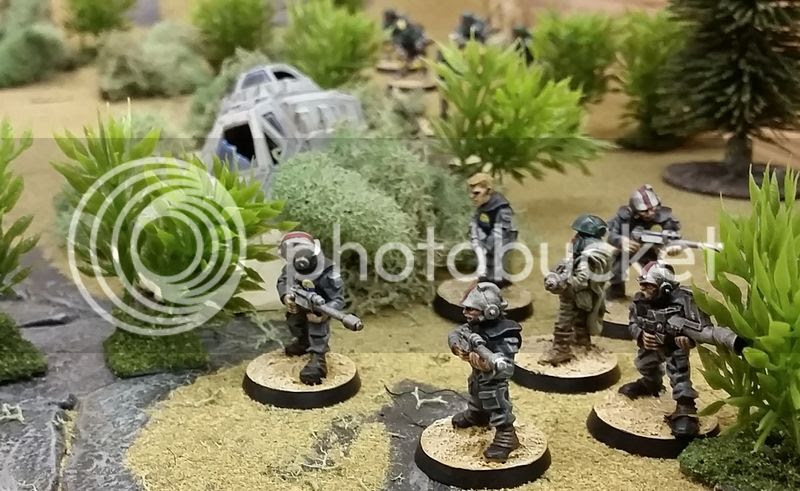 Imperial troops launch a grenade at the shouting pirates, raising the alarm Squat pirates take up position to defend the camp

The serenity of the forest died brutally in a cacophony of autogun and lasgun fire. Las bolts and bullets flew in all directions as frustrated troopers gleefully emptied magazines towards anything that moved.. The frustrations of a hard two day march through the forest were washed away in an orgy of gunfire and explosions. Before anyone could take stock of the situation three Imperial troopers lay dead, peppered with sizzling laser burns. Most of the squats had been literally ripped apart, victims of Cryyplah and his shuriken catapult and vicious autogun fire from Jones and his crew. The last remaining Squat ran back into the hardened building. 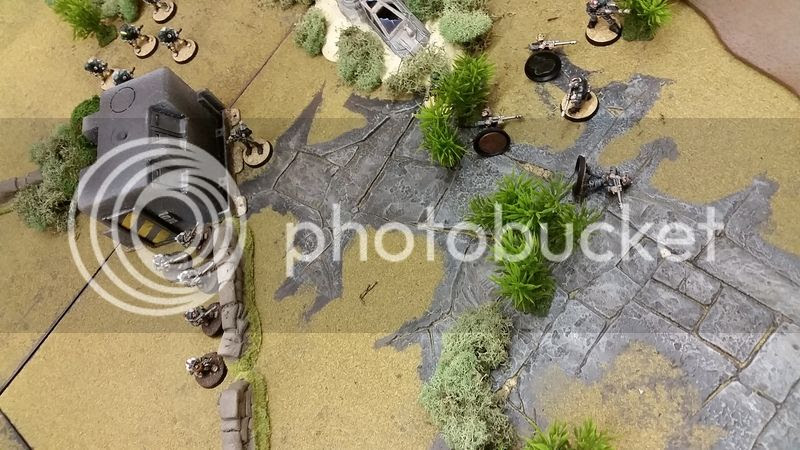 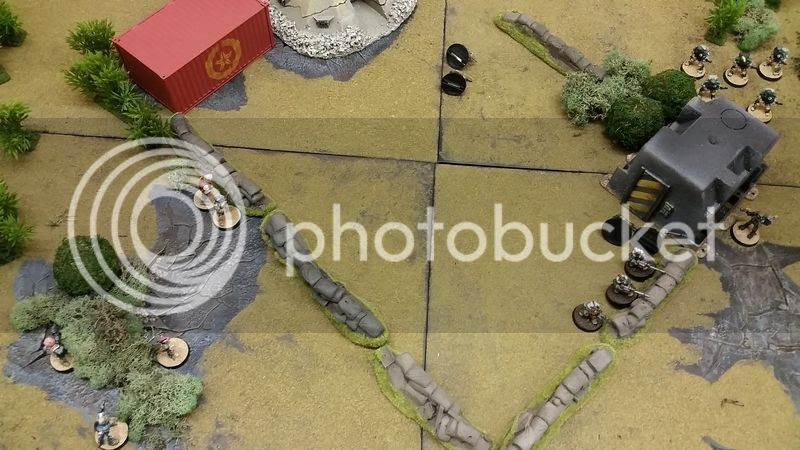 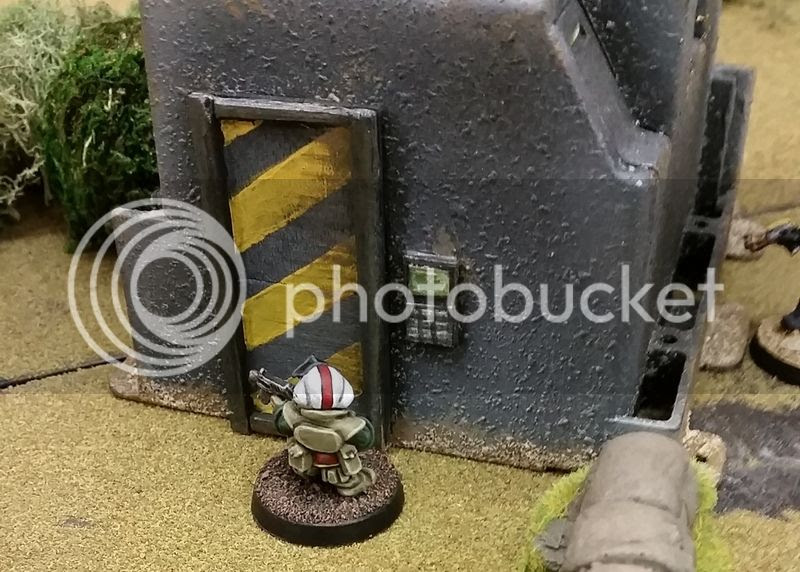 The remaining Imperial troops laid down fire while Alexis Yarvin audaciously leaped to the door of building 3 and started trying to unlock the door. Meanwhile Blaster Harris had investigated building 1 and found nothing, and had entered building 2 only to discover an Eldar pirate waiting. Harris lunged at the alien and the two became embroiled in brutal hand to hand combat. 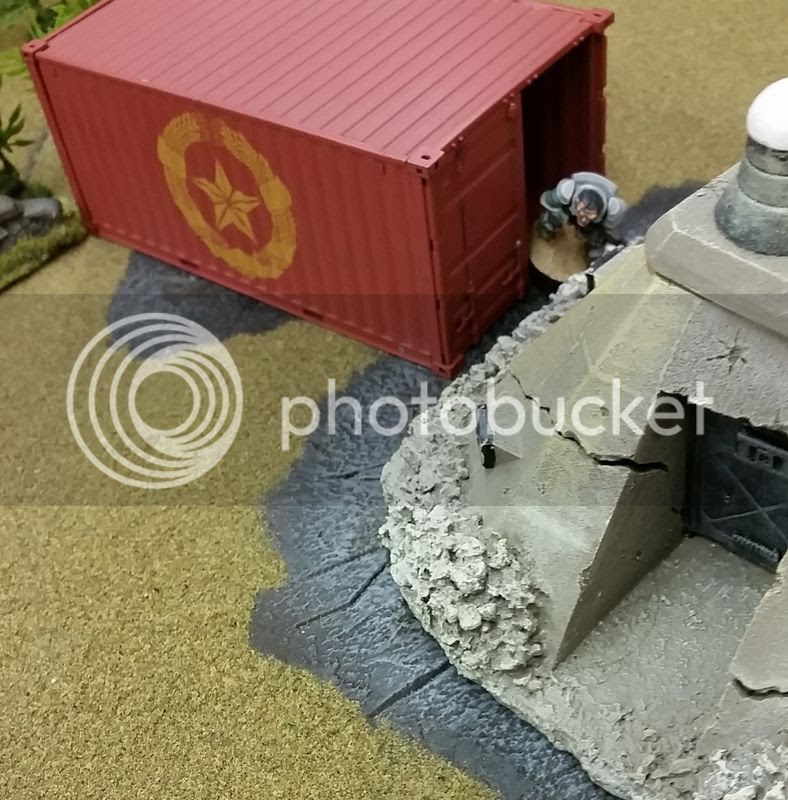 With Yarvin in the open, a group of pirates attempt to kill him but only managed to wound him with their autoguns. Before anyone knew what was going on, one of the pirates launched a crack missile at Yarvin. Fortunately the pirate's aim proved to be less than ideal, but the missile managed to penetrate the building and shorted out the door controls. Yarvin ducked behind the building to take advantage of some cover. Much to everyone's horror a battle robot emerged from the damaged building and started blasting away at targets, but only managed to wound Venko Fett. 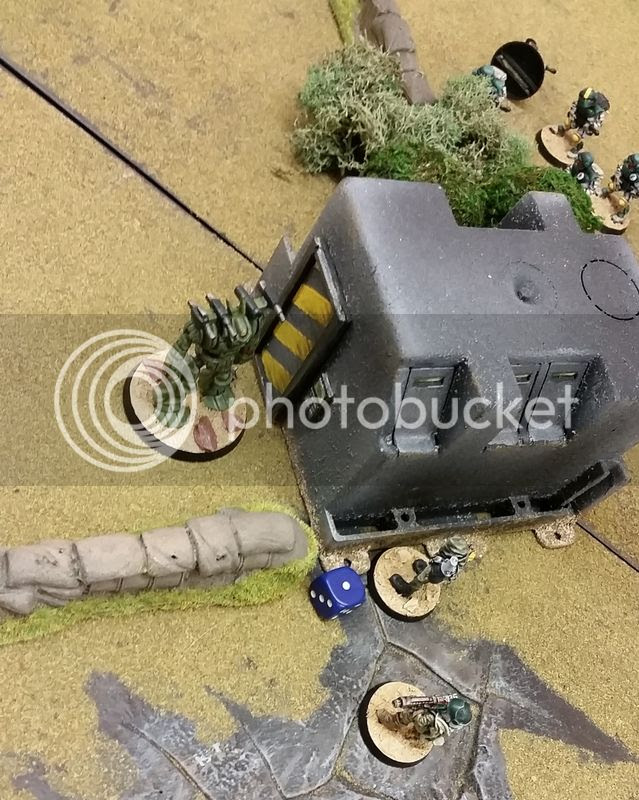 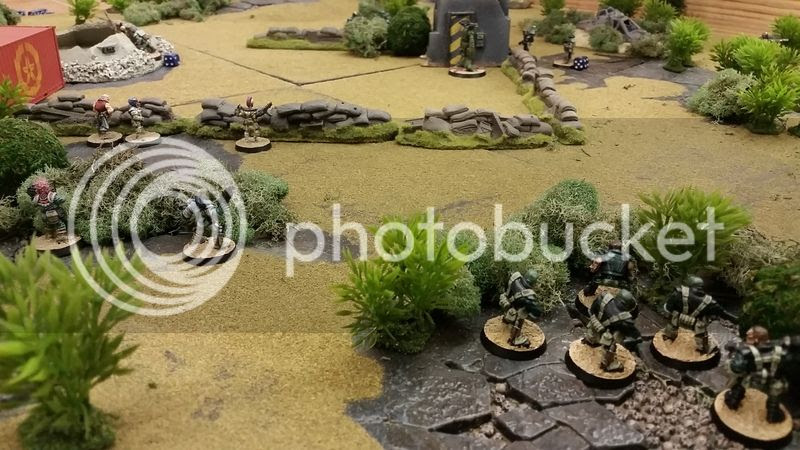 A view of the battlefield from the pirate's perspective 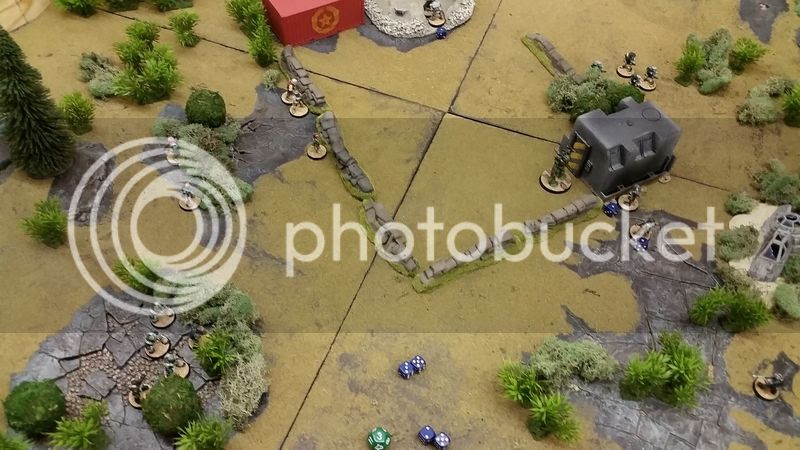 Boyd Benitez had never really amounted to much in life. After dropping out of school, he enlisted in the army. He was a pretty terrible trooper and he hated army life, he just couldn't adjust to the disciplined lifestyle. When the opportunity came to abandon his army unit and join the pirate crew of Two-Gun Jones, he jumped at the chance to get away.... but where did that get him? Lugging around an antique missile launcher on some disgusting forest moon, that's where! Two days of lugging this thing around the alien forest, no sleep, dry rations. He smelled like a rotting foot and he was pretty sure he had lost a toenail in his boot last night..... but he wasn't going to let this situation get the better of him. He would show them, all those people who said he would never amount to anything...

Boyd Benitez loaded a crack missile and took aim at the marauding robot. Sweat was pouring from his face, but it didn't matter - he was in the zone now. He didn't even hear his squad leader yelling at him to cease fire. He lined up the reticle and squeezed the trigger. 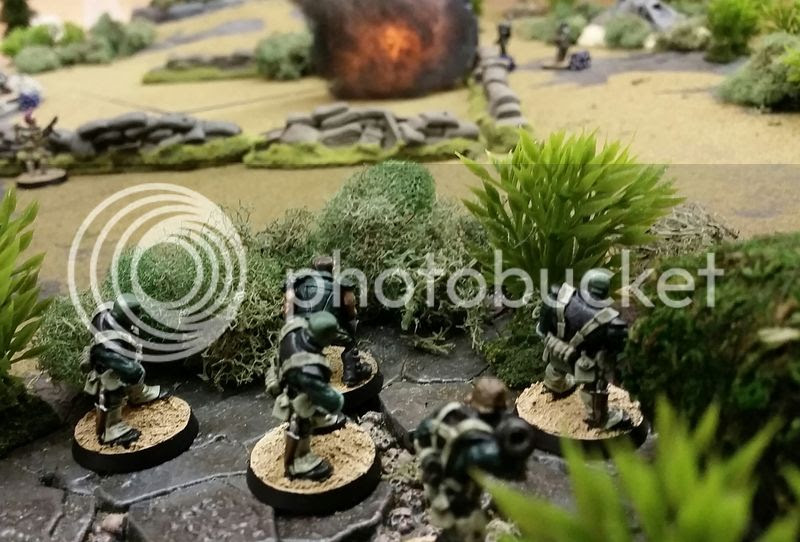 Boyd Benitez destroys the robot in a single shot

The robot died in a glorious explosion and crumpled into a smoking heap of hydraulic fluid and electronics. Boyd Benitez smiled with satisfaction, but when he looked at his squad leader's face he saw that familiar look again. He did something wrong. Two-Gun Jones cursed over the communicator. The robot was doing all his dirty work fighting off the Imperials, but now it was the perfect smokescreen to get into the building.

Alexis Yarvin ordered his detachment to lay down suppressing fire and he darted into the building, through the oily cloud of smoke that was the smoldering battle robot. The Imperials lobbed another frag grenade at Benitez's squad, killing one pirate in the blast. The rest of the squad dove for cover from the las bolts zipping over their heads. Venko Fett hit one of the pirates with his needler, rendering her unconscious. 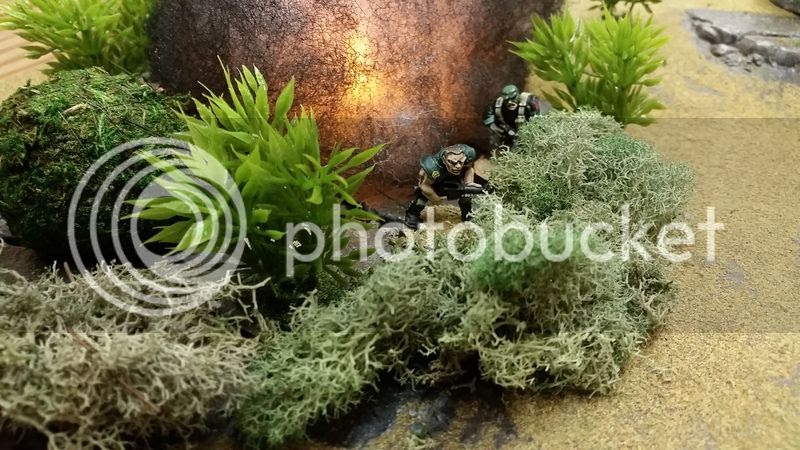 Yarvin entered the building with lighting fast efficiency and shredded the last of the seven Squats with his shuriken pistol. After an awkward exchange with the hostage, Yarvin convinced her to follow him out of the building. 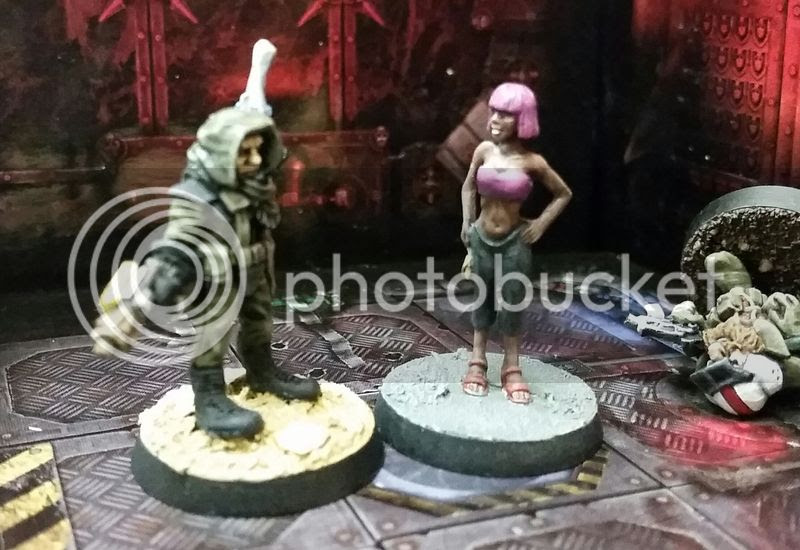 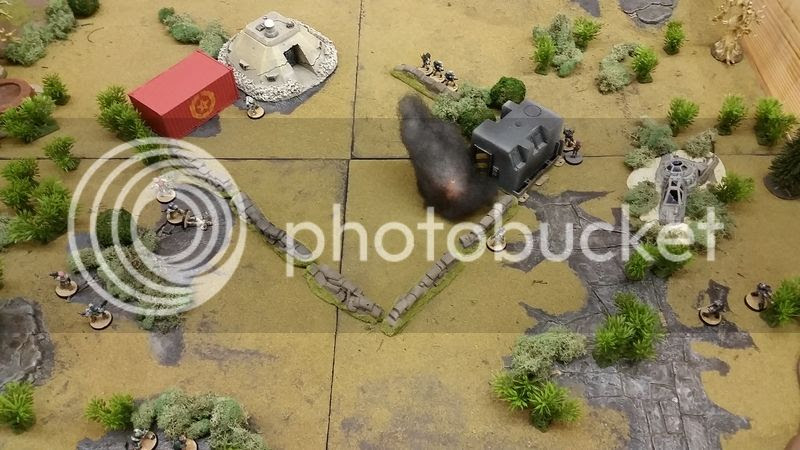 The Imperials lay down a heavy curtain of fire 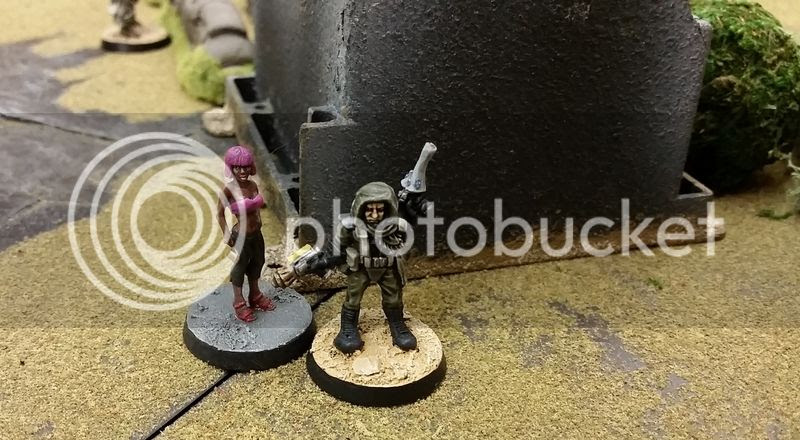 Yarvin and hostage run for safety

With the hostage secured, Yarvin sends a transmission to Serpico to send a retrieval shuttle and additional troops to secure the camp. He tags the hostage with a teleport homer and she is safely teleported aboard Serpico's ship. Two-Gun Jones curses his bad luck and ordered his crew to fall back into the forest before more Imperials arrive. 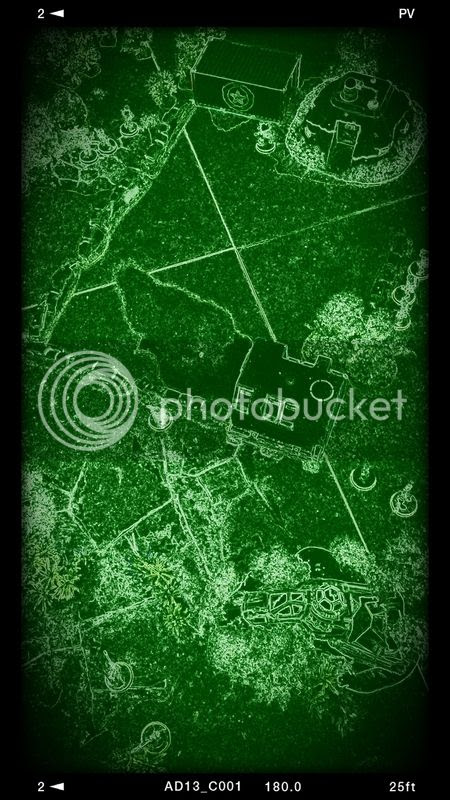 Drone imagery captures Yarvin and the hostage moving to safety

The Imperials carried the day, but at a heavy cost. Yarvin and Fett were both wounded in the raid, and almost half the raiding force lay dead. A worthy sacrifice, thought Serpico. The political goodwill he would gain in the sector would far outweigh the lives of the the men killed today. Serpico instructed his administrative servitor to plan a memorial service for the fallen troopers and prepare to leave the system as soon as Yarvin reported the camp as clear.

Posted by Bulldoglopez at 9:59 AM