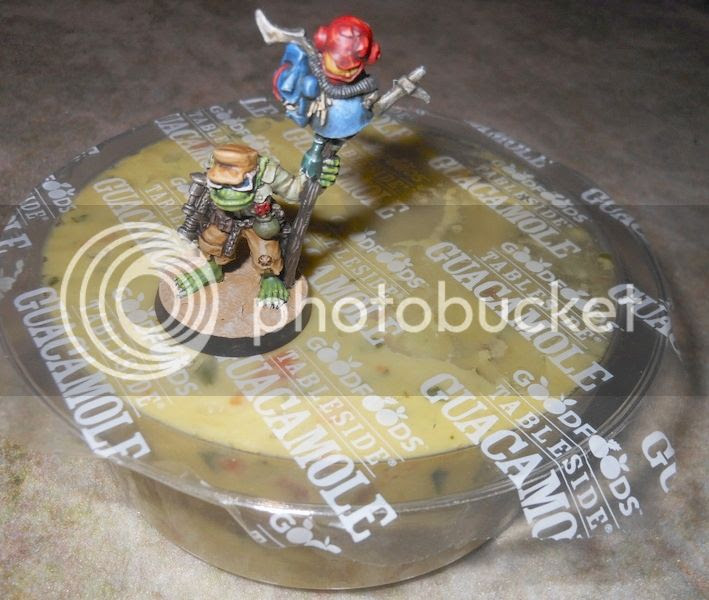 What am I talking about? The 2017 Northern Virginia and Other States Grand Regional Oldhammer Tournament also known and more easily pronounced NOVAOSGROT!!! Yeah we had guacamole. You jealous? Yeah you are.

I saw some great stuff going on including Andrew from Acceptable Radiation showing off some very cool zombies. Everyone who knows Andrew will be happy to hear that I actually caught him playing a game. Yes... it's true. He even had some fun.

One newcomer was Urion from the Madhouse Society blog. While not new to the US Oldhammer scene this is the first time I met him in person, so therefore he is new. As far as I am concerned he emerged from a pot of spilled titillating pink that he been left to sit in a nuclear power plant for too long. Urion had some beautiful miniatures to show off, all of which are showcased on his blog. I was delighted to have had the opportunity to see his work in person and it was even kind of horrifying when I saw him actually gaming with his figures. Alright. Enough about his painting.

Seriously though, its fucking beautiful stuff.

ON TO THE GAMES!

I ran a three game mini-campaign using my Rogue Ops house rules and tested out unit and hero campaign progression borrowing from Mordheim, Necromunda, Black Ops and Rogue Stars. As reported in previous posts, the Rogue Ops house rules deliver some absolutely brutal firefights. While that's pretty fun on the tabletop it does pose a problem for unit advancement. In Mordheim and Necromunda, it was a fair bet that your models would survive from game to game. In all three games I ran, both forces were almost completely wiped out every time. While it was pretty fun, it won't work for campaign play. I'm working on some ideas for advancement and unit recovery between games.

The first game was a stealth game. Uglug Mug Thumpa's Ork warband had taken hostage an alien dignitary for a tidy ransom. A band of Space Pirates led by the daring nefarious Two-Gun Jones caught word of the simple-minded Ork plot and decided to raid the Ork camp and capture the hostage for themselves.

All unit stats came straight from the Rogue Trader rulebook. The stealth game ended rather abruptly when a sentry randomly wandered right into Two-Gun Jones as he was attempting to sneak up on a guard post. When the shooting started the humans had the advantage of greater range with 30" range autoguns, but had a very hard time dealing with T4 Orks. Fortunately they brought along a robot that accounted for virtually every dead Ork on the table. 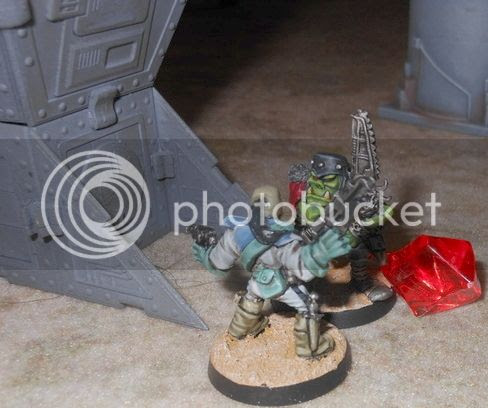 A great moment of the game was when the Ork and Human leaders clashed in hand-to-hand combat with Two-Gun Jones coming out on top. Unfortunately for poor Two-Gun was cut down by heavy bolter fire.

After the game I used the Mordheim recovery chart for both heroes and allowed them to acquire new weapons and equipment based on equipment charts in the Rogue Trader rule book. I think that my two participants could have rolled better. Two-Gun ended up with a -2 WS penalty and poor Uglug suffered a  decrease in toughness.

In the end the humans were not able to capture the hostage, but the orks were almost completely wiped off the table by the human side's robot.

The second game was a more straightforward shootout scenario. Uglug and his surviving boyz decided to stop off at a nearby Combat  Burgers after collecting their bounty but were tracked down by Two-Gun and his crew, who were out for revenge. 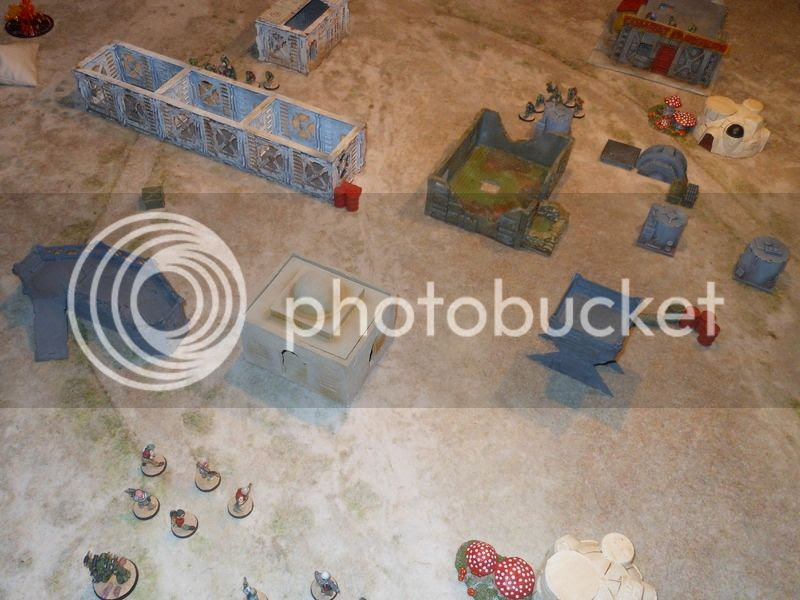 The human player started off the the game with some pretty aggressive moves and got some of his units caught out in the open... which always ends badly. The robot was again able to mop up quite a few orks, but was nearly destroyed by a hail of heavy bolter fire. Using cover in this game is just not an option. 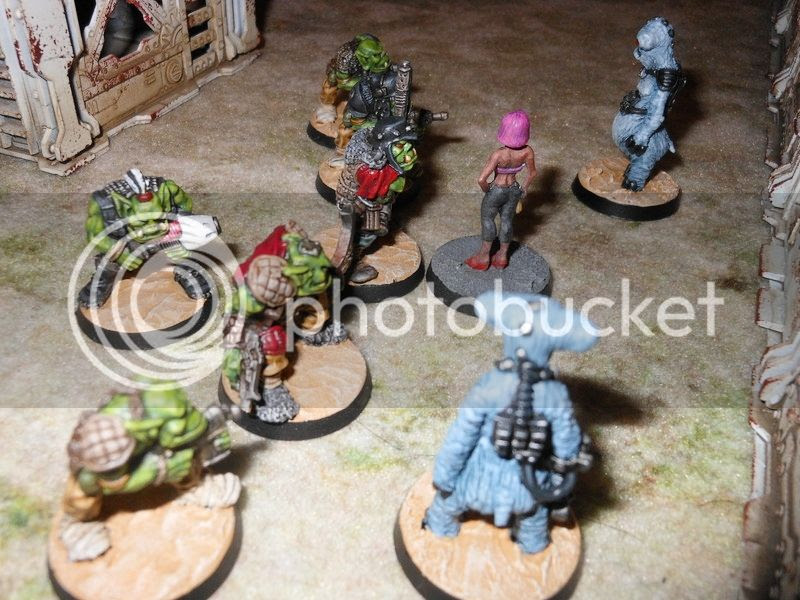 Some orks harassing the locals

The humans still had a hard time dealing with the T4 orks, but still managed to do a significant amount of damage. In the end though, too many humans were killed and the scenario went to the orks. 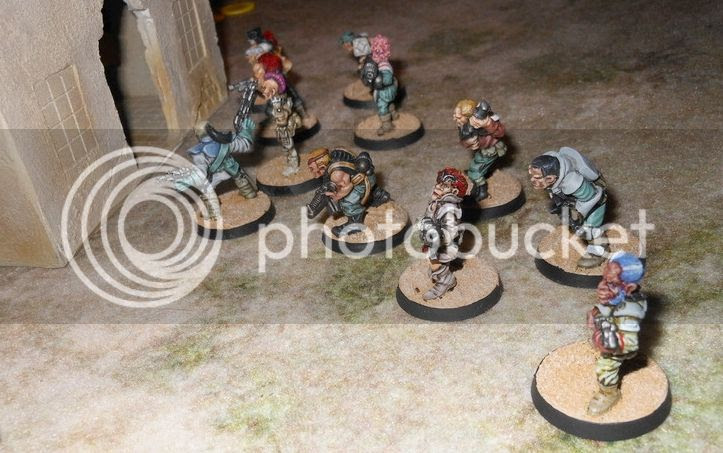 The humans move into position 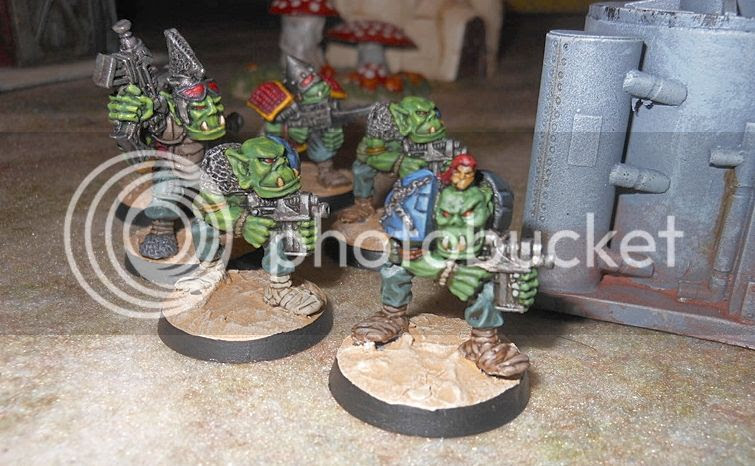 Orks scramble towards the advancing humans

Both sides had much better luck on their new weapons and equipment rolls after the game. The humans gained a set of power armor and a digital needler. The orks rolled up an autocannon, which would hopefully give them a better chance at destroying the robot in the final game.

MUSHROOM HUNT!! Both crews went searching the forest for valuable intergalactic super shrooms, which fetch a tasty price on the back market. Sadly these mushrooms only exist inside a deadly forest filled with giant carnivorous plants! Possible mushroom locations were marked with yellow counters. The player with the most mushrooms at the end of the game would win. In order to search for a mushroom, a player had to get a model into base contact with a counter and roll a D6. There was a 50% chance that the counter would reveal a carnivorous plant, which instantly killed the model in contact. 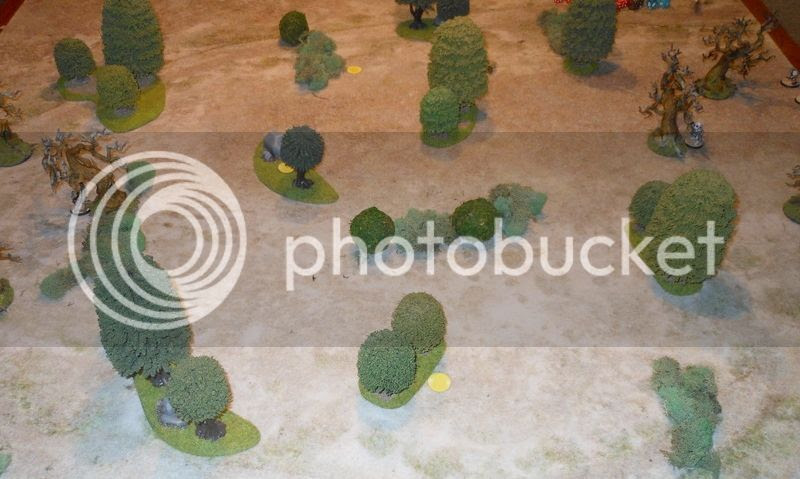 Between the plants and the gunfire almost everything on the table died. The robot was just brutal, but did almost fall victim to a fearsome ork and his crack grenandes. Two models were eaten by carnivorous plants and only one mushroom patch was found... by Two-Gun nonetheless. He also happened to be the last human model on the table at the=is point in the game. 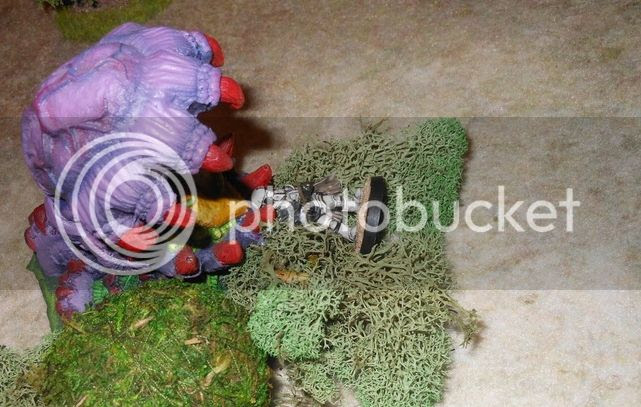 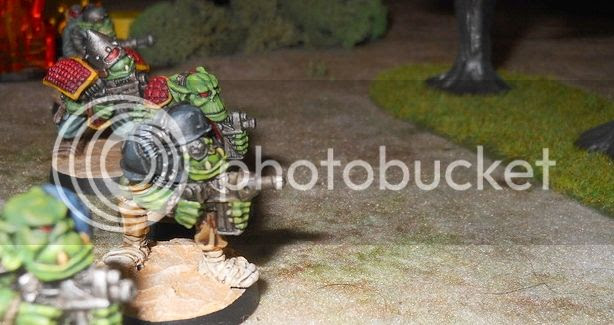 Orks advance through the forest 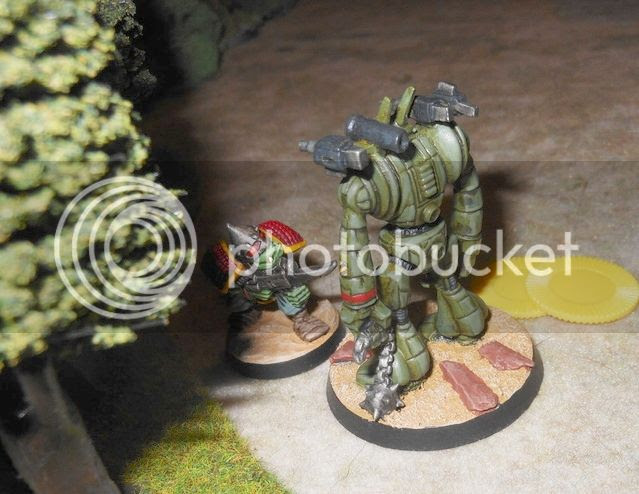 The robot kills everything it sees 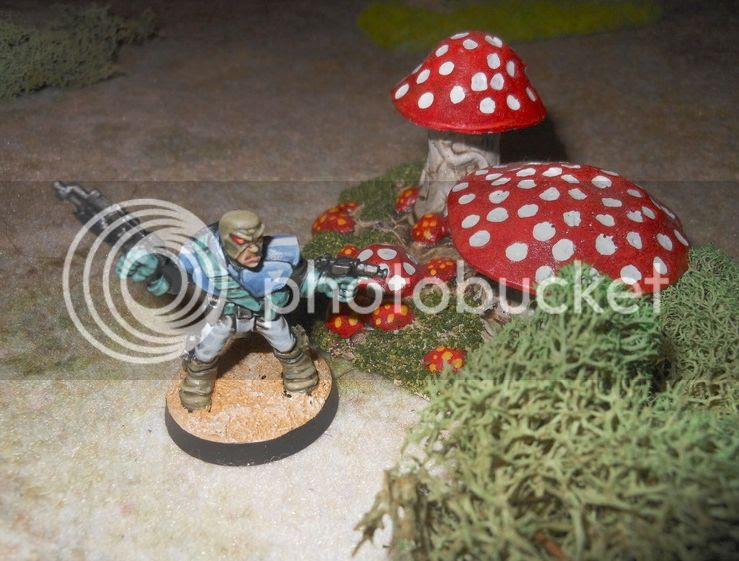 Overall it was a great day of gaming! After we grabbed dinner I even got in a game of Manowar... which is hilariously brutal! I hope yo play more Manowar in the future. I'm working on putting some of the campaign ideas on paper for future games. Everyone involved seem to have a really good time. The Rogue Ops house rules are fast and easy and let us get in three games in one day. Until next time!
Posted by Bulldoglopez at 11:28 AM