This weekend Con-fusion hosted a grand Oldhammer summit at his grand winter keep. In attendance was Fredrick Kober, Ardyer, Oathead, and myself. Real names have been changed to protect the guilty!

Fredrick and myself landed our personal shuttle at Con-fusion's winter keep on Saturday afternoon, and after ogling his collection of Oldhammer goodies, we got started playing some Rogue Trader! Con-fusion's marines teamed up with my Crimson Fists to defend a bombed-out ruined chapel and an irradiated water supply from the nefarious marauding Ork warband of Fredrick Kober!! 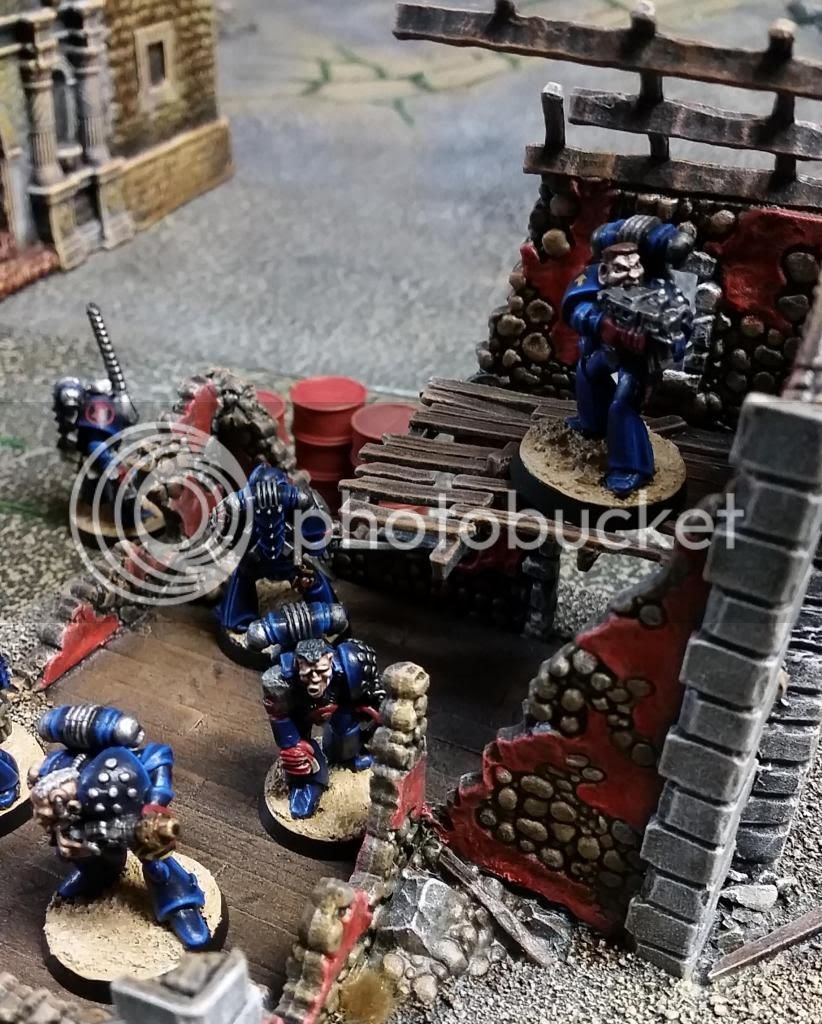 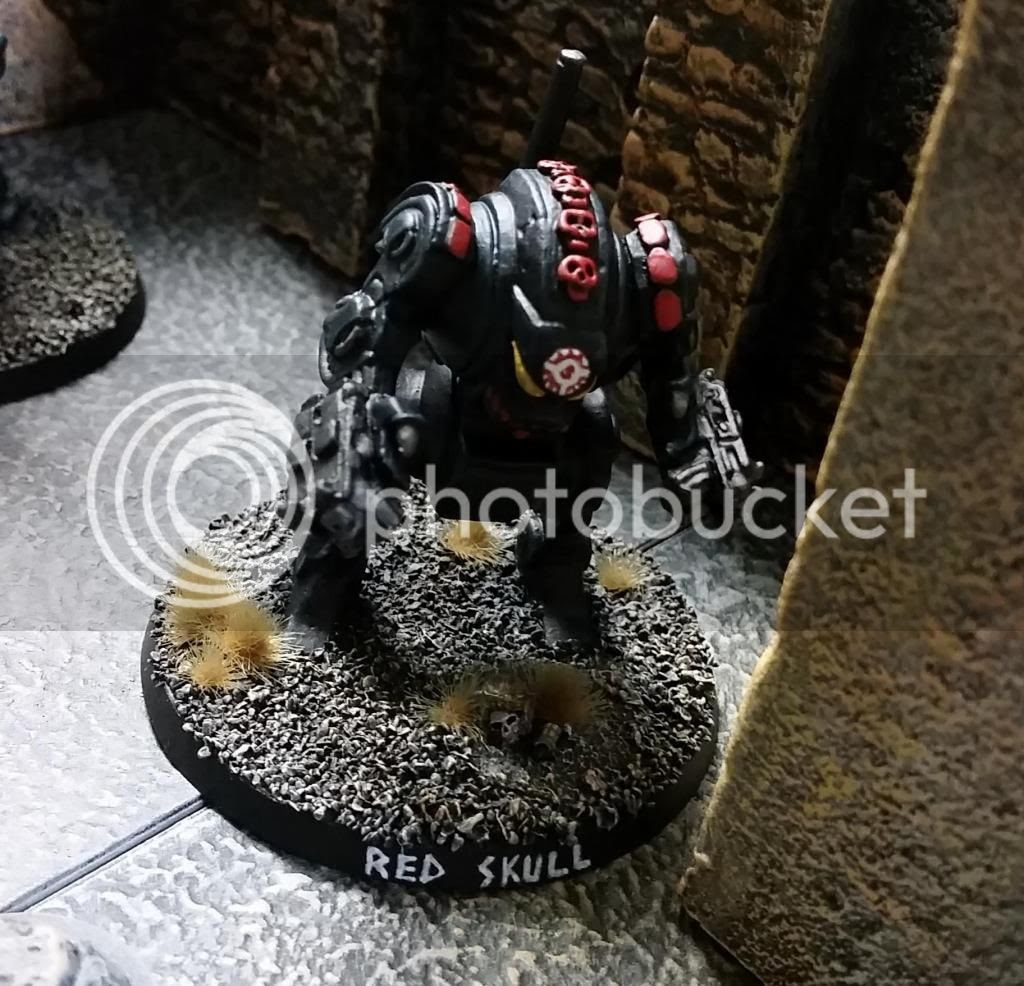 The Marines took up position in the ruined chapel and surrounding buildings and waited for the Orks to wander into bolter range. Con-fusion's tactical squad took position inside the chapel walls with two dreadnoughts in position between the bases of the corner towers. The crimson fists placed a tactical squad in a corner tower, one squad in a ruined farm house, a crusader maniple and dreadnought on the opposite side from the other two dreadnoughts. 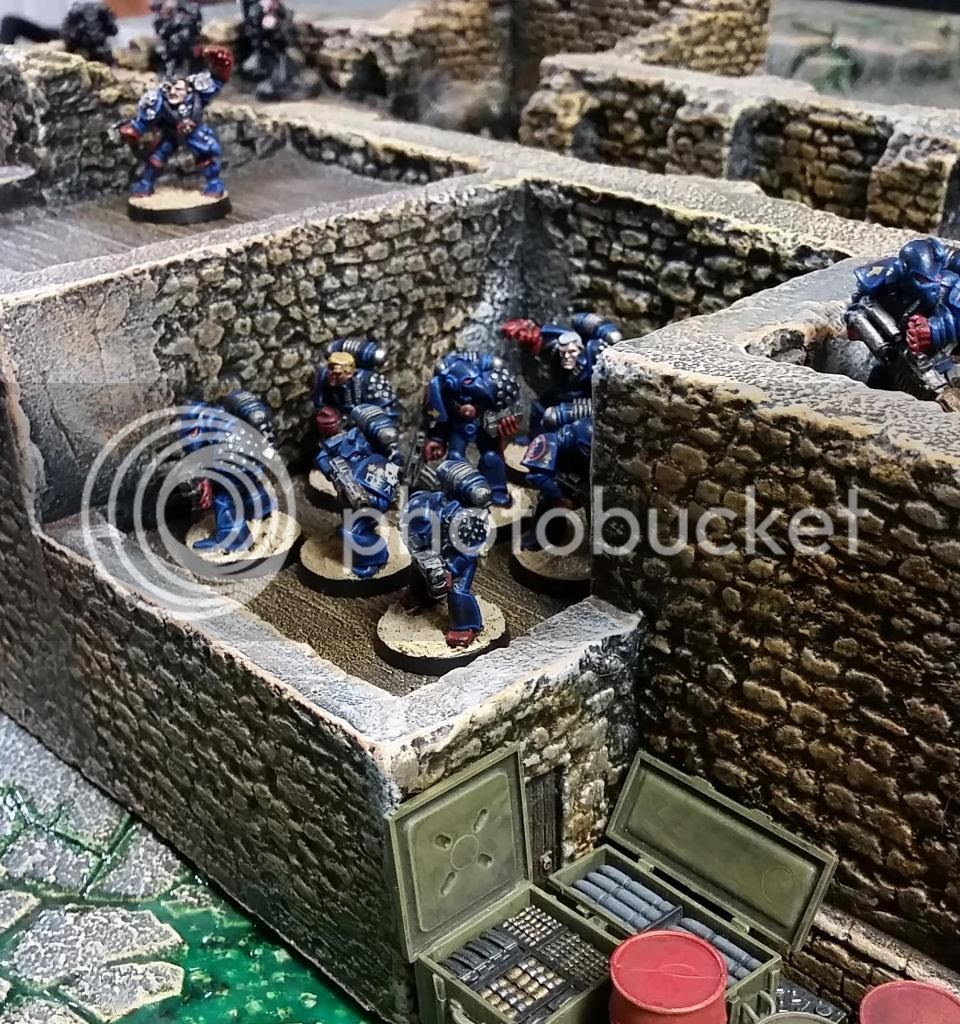 The Orks were allowed to appear from any board edge on the first turn. Fredrick attacked the marines from two sides, trapping the marines between two walls of erratic Ork Bolta fire. Despite the  barrage of gunfire, the marines weathered the first turn well because they took advantage of hard cover bonuses. 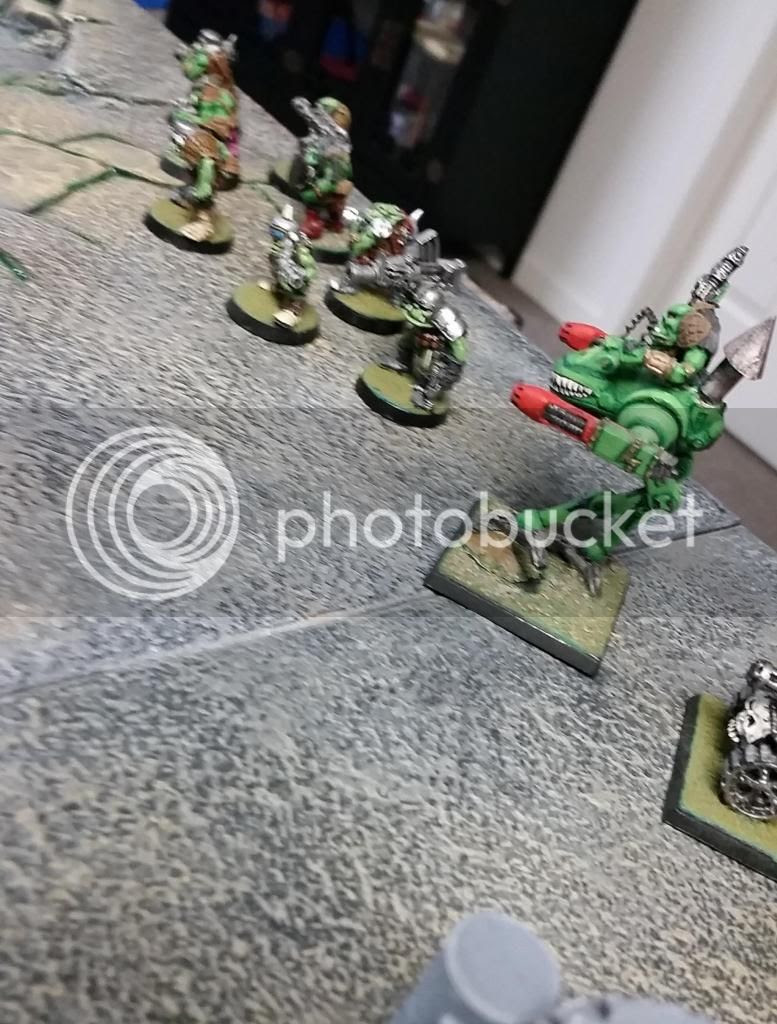 An Ork Dreadnought blasts the Marines with lascannon fire 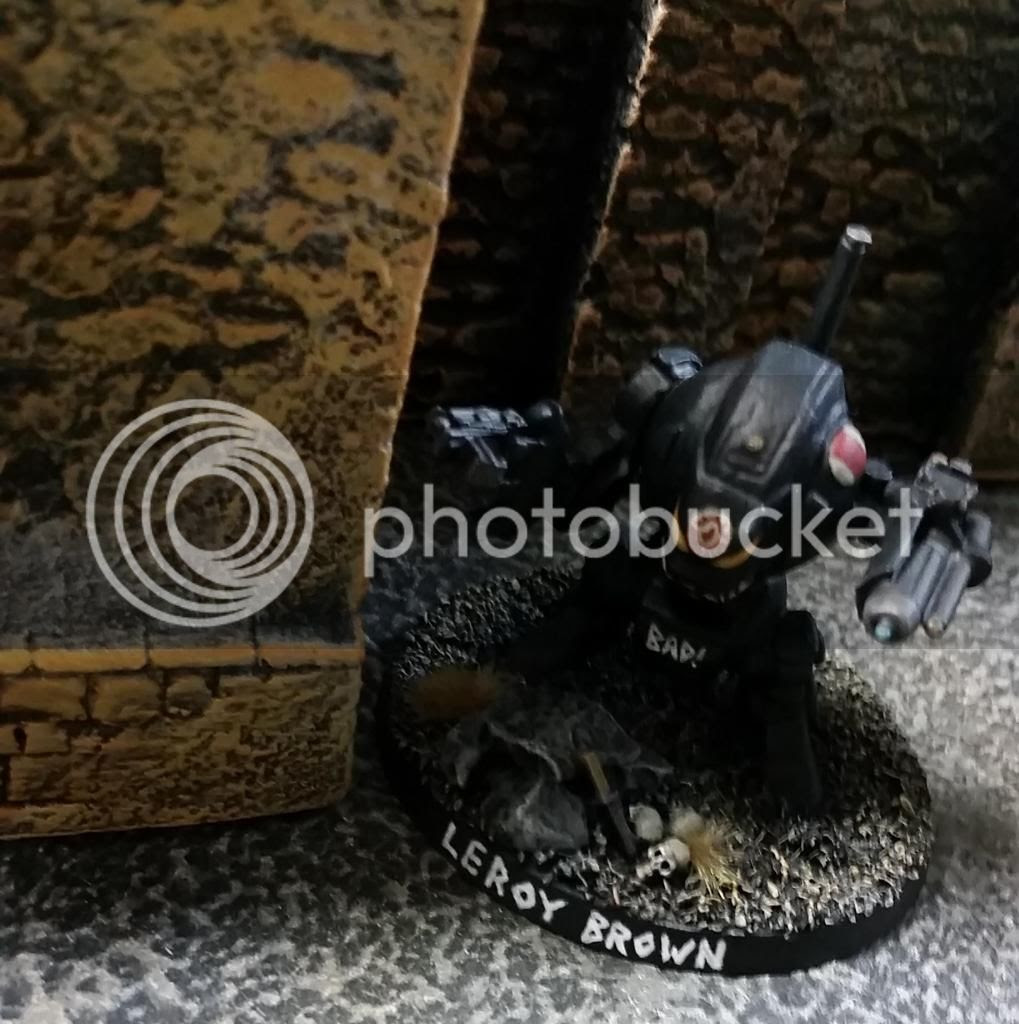 Despite their best efforts, the Orks suffered heavy casualties thanks to accurate fire from the Marines and paper-thin flak armor. It wasn't all down hill for the Orks, One of the dreadnoughts earned his stripes as a tank killer, taking down on Marine Dreadnought (Bad Leroy Brown) and critically damaging Red Skull. But, just as the Marines thought they had won the day.....

A Stompa appeared to ruin their day. 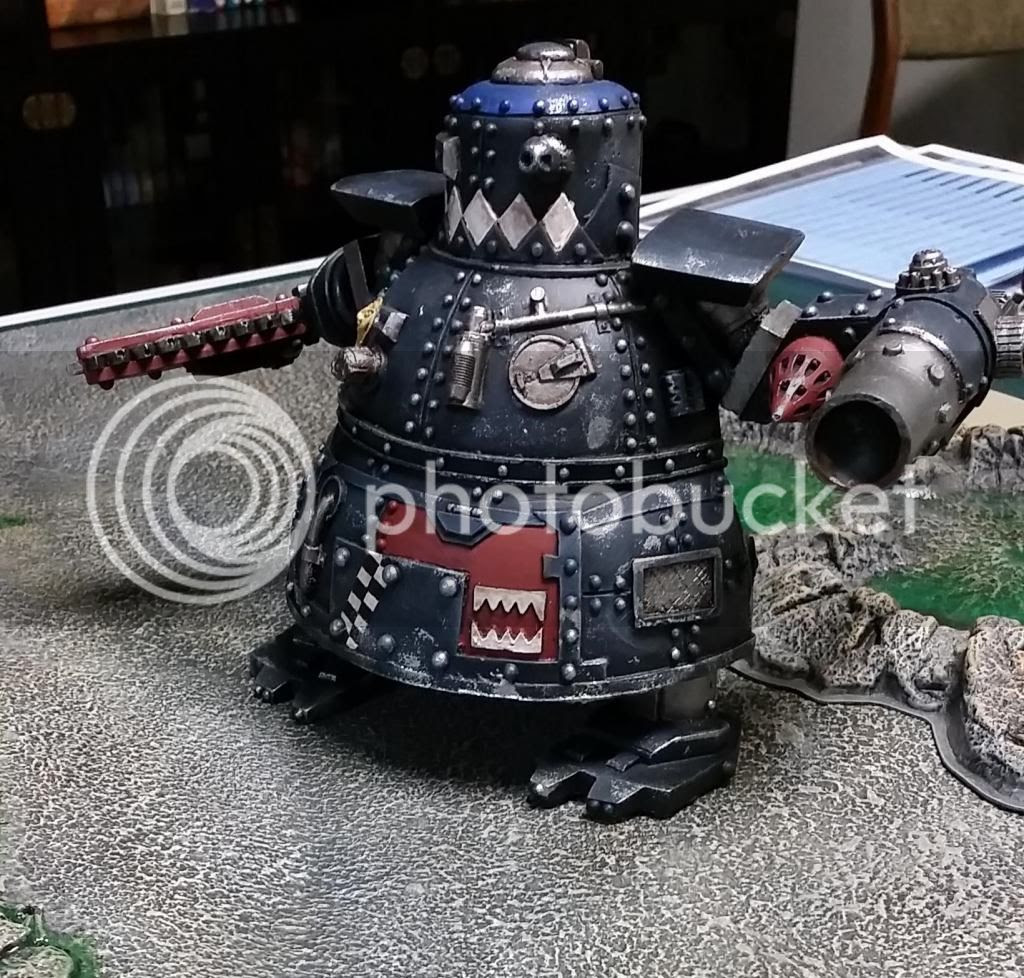 Now, there are no Stompa rules in Rogue Trader, so I just used the rules for a Stega-Tank and equipped it with a Macro-Cannon. Boom. Easy fix. Rogue Trader is the greatest. Despite the destruction of the majority of the Ork force, the Stompa lumbered forward, dumping Macro Cannon shells onto Marine positions. The Crimson Fist Techmarine narrowly escaped death by Macro Cannon only to be vaporized the following turn by foolishly attempting to take cover on top of some ammo and fuel. 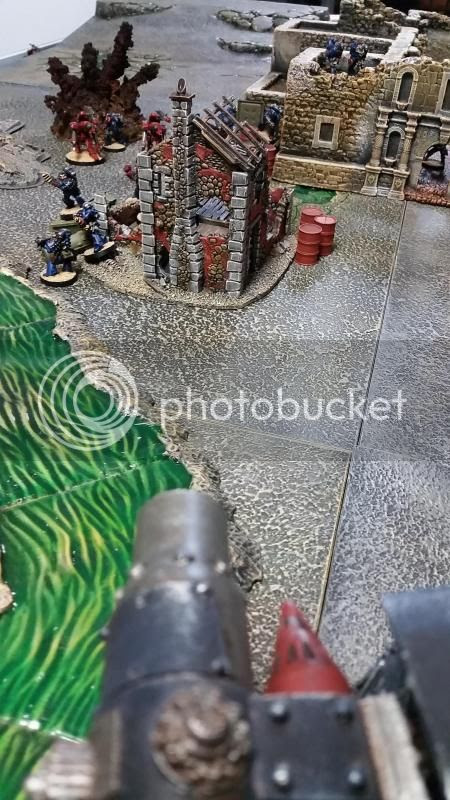 HA! HA! Sticks and stones will break my bones but I laugh at macro cannon shells 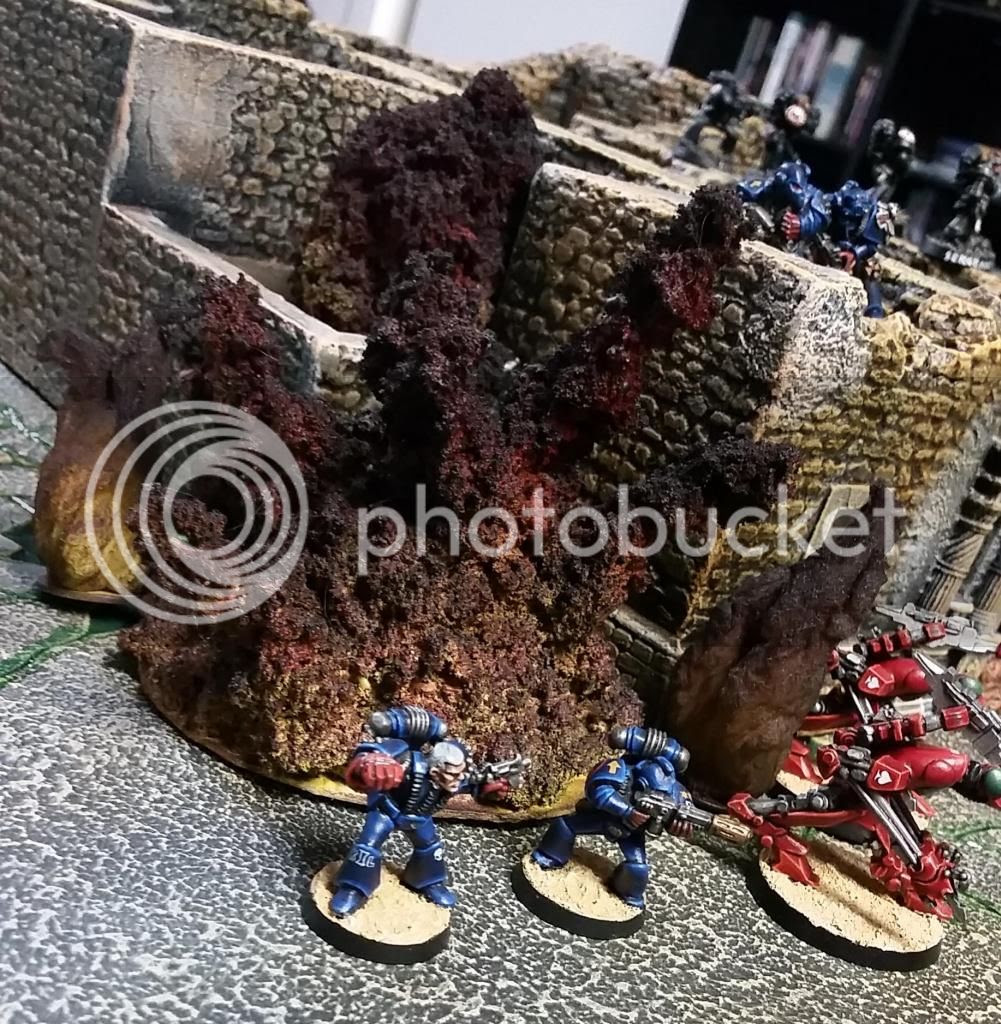 The Stompa continued stomping forward, pumping Macro shells into Marine positions, but alas.... the Marines proved too resolute for the shambling war machine. At the end of the day there were just too many lascannons and melta guns around for poor Mister Stompa.... 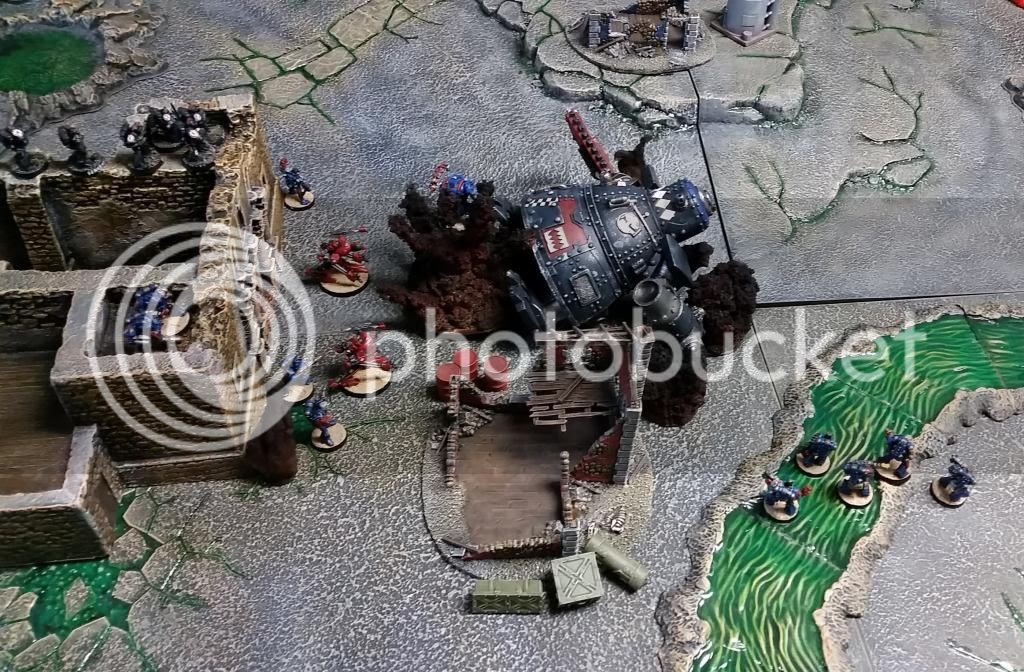 Posted by Bulldoglopez at 6:38 PM