We Need A Few Not-so-Good Men

Now that I've gotten that out of the way, I present SPAAAACE BASTARDS!!

This summer I had the chance to go over to jolly England to attend BOYL and meet up with many of my favorite forum and blogosphere personalities. One of those guys was the one and only Erasmus Papafakis (real name). He and a couple other Oldhammer-ites came up with the idea of running a Space Bastard game. Basically, come up with a bunch of murderous, psychotic bastards, slap some power armor on them and send them on their way raping and pillaging everything in sight.
Initially I was just going to paint up some metal Rogue Trader marines in varied camouflage patterns, iconography, slogans etc..... but that's boring. I decided I would really embrace the idea and get to work putting together some lunatics. I used RTB01 plastics as the base for each model, but really went into a deep dive into my bits box. 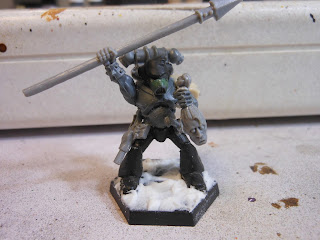 I really wanted to evoke a Mad Max/Heavy Metal vibe with these marines. I wanted them to look psychotic, but was careful not to make them look too much like Chaos Marines. A pack of Maxmini "Evil Heads" I had laying around really helped create that look. 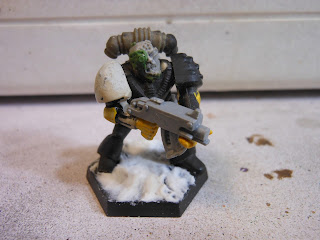 I really had lots of fun rummaging through all the various bits I've amassed over the years, and I wasn't too terribly concerned with making everything look perfect. I feel like the Rogue Trader aesthetic gave me more freedom than I would get from say modelling something Pre-Heresy or doing a modern 40k kit bash. The evil heads are too out of proportion and exaggerated for anything in modern 40k, and I thought they would sit in the bottom of a box forever. They ended up being perfect for this project. 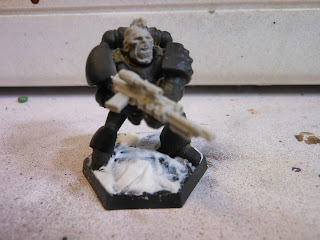 I also tried to switch up the weapons load-out as much as I could to really drive home the idea that these guys have been so far removed from their chapter long enough to have had to scrounge for weapons and armor. I imagine they went rogue from their chapter decades ago and have basically become pirates or mercenaries. 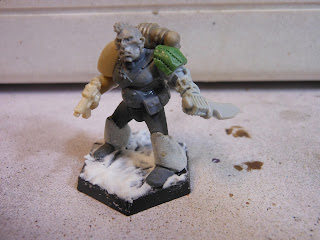 I'm really happy with the way they turned out. I started the first bastard two nights ago and basically steamrolled through the whole squad. When you get a chance, check out the thread on the Oldhammer Forum and join in! The game isn't supposed to hit the table until next BOYL, so there's plenty of time to get involved. Hopefully the lunacy spreads! 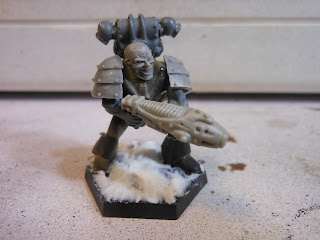 In closing, I would just like to wish everyone at Photobucket a miserable life. I hope that they maybe get gang-banged to death by angry walruses.

Posted by Bulldoglopez at 6:40 PM