As promised here is by best attempt at a step-by-step description of my Orktober diorama. 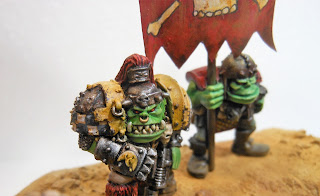 Alrighty! My goal in building the diorama was to spend as little money as possible and use what I had on hand. The expanded styrofoam is a bit flimsy for my taste, but I didn't want to go out and buy a sheet of insulation foam even though it is much sturdier. The only materials I bought specifically for this project was the modelling clay and the wood base. I tried to find something around the house that would make a suitable base, but nothing I found worked out. I have seen people use old picture frames, but I didn't have any in the right shape 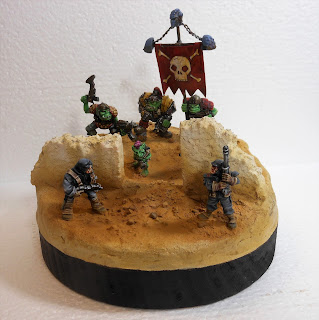 Selecting the miniatures was the first step. I knew I was going for an Ork theme, but also wanted my diorama to tell a story. I was very fortunate to have enough Rogue Trader era miniatures in my bits box for the job. Every diorama should be able to convey some kind of narrative, otherwise you're just putting a miniature on a fancy base.

Once I had the miniatures picked out, I sketched out my composition and planned the layout. The poses of the miniatures really dictated the story and composition. If I had used modern figures, I could have had more freedom with they story, but part of the fun was being creative with the limited scope the figures provided me. 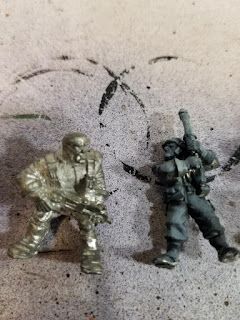 I knew I wanted to paint the miniatures to a high standard and so I spent most of the month painting them. I started by cleaning up the miniatures. I filed down any mold lines or flash using a modelling knife and some files. I then cleaned the surfaces with 2 different grits of modelling sandpaper, one medium grit to catch any excess flash or imperfections and the a superfine grit to smooth them out. The figures were then cleaned using simple green and warm water. Once the models were dry, I clipped the tabs off the feet and inserted pins into the feet to assist in fixing them to the base. 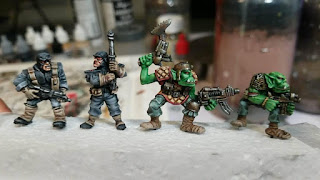 I mounted each figure to a cork so that I could paint them without handling any painted surfaces. I find this very helpful when painting miniatures to a display standard. Once the miniatures were painted they were given a light coat of Testors Dullcote and stuck on a spare piece of foam for safe keeping until it was time to mount them. 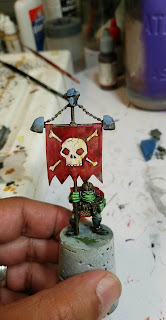 The standard was constructed using brass rod. I cut the rod to the appropriate length and then fixed the crossbar using a small blob of green stuff and some super glue after the green stuff cured. The "trophies" were clipped from a RTB01 plastic Space Marine and the chain was some spare jewelry chain I had in my toolbox. The banner was drawn onto some regular printer paper and painted. After I sealed the miniature with Dullcote, I added an oil filter using burnt umber, ochre, and black oil paints.

The core of the base was built up with the 1/2" styrofoam on top of a circular foamcore base. I built up the height by gluing different sized slats on top of eachother. The broken walls are also styrofoam pieces. I broke off chunks to make them more interesting shapes. I also gouged holed into the walls where I would later sculpt bullet holes. 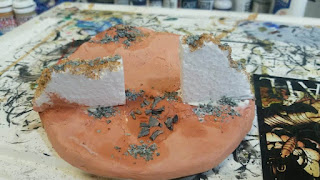 Once everything dried I test-fitted all the figures, making sure the pins in their feet created guide holes for inserting them after the base was painted. I then clipped some paperclips and inserted them in the holes prior to texturing the base with plaster. 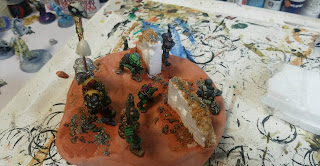 I created the sand texture by sifting hydrocal over the base and then spraying the texture with a mix of PVA and water. I took care to mist the mixture over the plaster so that it would dry in a realistic manner. I coated the walls with several layers of foam coat, a plaster specifically made to cover styrofoam. It dries very hard and takes paint very easily. Once the plaster coats had dried I sculpted the bullet holes with some air dry clay. After a final test fit I built up the base around the feet of some of the models to fill in gaps and enhance the realism. I also used some sand and pebbles to add more texture. 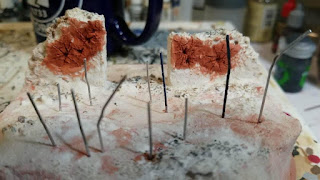 The base was airbrushed with different sand colors before a final light drybrushing. The figures were then glued in place. 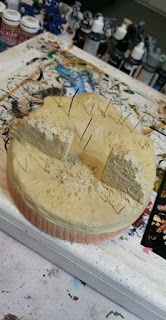 Once I was satisfied with the base, I added some final touches. In order to create the look of sun-bleached equipment and clothing, I airbrushed some of the figures with very thin coats of white. This was a zenithal highlight, airbrushing on the color only from the top to simulate how sunlight would hit the model. This is a technique used by military modelers to create an extra level of realism. This was applied in very very very very very thin coats. If you have never done this before, make sure to test out the effect before you decide to ruin a display model by overdoing it. 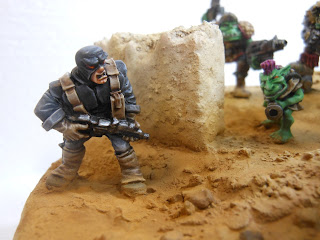 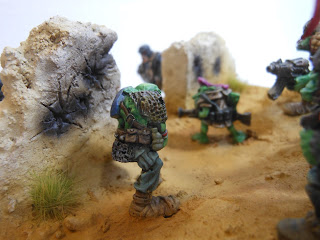 Scorch patterns were added by airbrush and dry brush. Grass tufts add some character to the scene.

I was very happy with the final result and i'm planning on putting together another diorama scene sometime in the next few months. This is the first time I have written a tutorial like this and hope it was helpful. Questions and comments are welcome. Thanks for reading!
Posted by Bulldoglopez at 6:49 PM