Dem Bones in the New World!

Well I said I would never do it, but here we are... I've wanted to collect an undead army ever since I saw Richard Gunson's undead army in White Dwarf 142. My first Warhammer Fantasy army was Orcs and Goblins and stuck with those through a couple different editions. I always told myself that I would never go down the rabbit hole of collecting undead, but then I got a few sprues of skeletons in a trade and all of a sudden I'm staring at 2000 points of painted undead. Funny how life works. 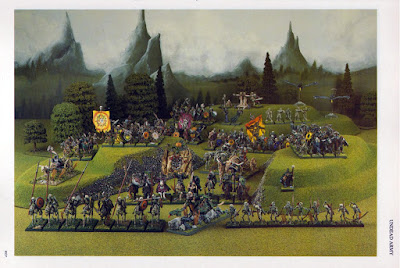 I decided the core of the army would be two big units of the compulsory troop choices, namely grim reapers and skeleton warriors. Both units are 35 skeletons strong, which gives them enough bones to make it across the battlefield and still have enough ranks left to buff up their combat resolution. 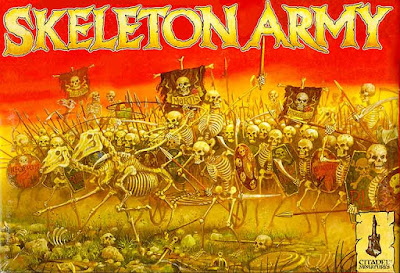 Fire support comes in the form of skeleton archers and two screaming skull catapults. I have a few more models on the way that will bump up the unit to twenty. Three Carrion make up a nice support unit for the infantry to help turn the tide once they get into combat and their hefty WS 2 starts to kick in. Finally the army is led by a level 20 Necromancer. 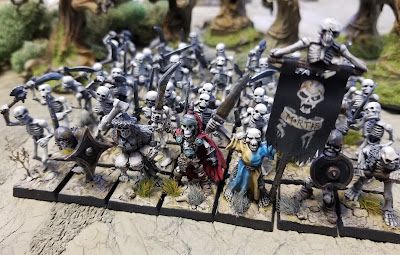 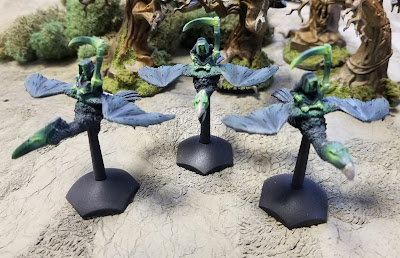 Most of the paint work on the skeletons was done with an airbrush. I started with a dak brown base coat, then applied a layer of bone and then off white. After a gloss varnish, they were given a coat of Secret Weapon Soft Body Black and finally drybrushed with Secret Weapon Weathered Wood. The bases were given a wash of Secret Weapon Sewer Water and a light drybrush. I enjoyed painting rust effects on the weapons and armor, it gave me a chance to play round with rust effect from different paint lines. I used reds and purples as accent colors throughout. 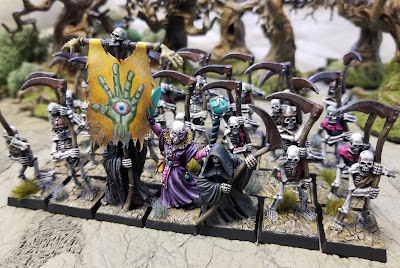 The banners were both hand painted on drawing paper. I am particularly happy with the yellow banner with the hand motif. After the painting was complete, they were coated with PVA and manipulated into shape on the models. 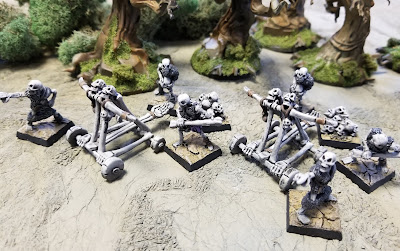 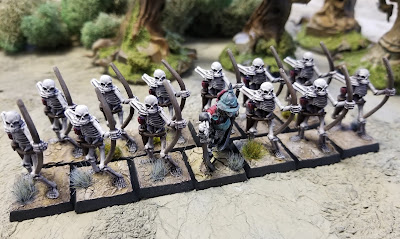 The Necromancer was painted in a purple and pink motif with a jade green accent color. The jade highlights were gradually built up with an airbrush. I probably could have continued to build up to a paler highlight but I decided to cut it off so I could continue working on more regiments. 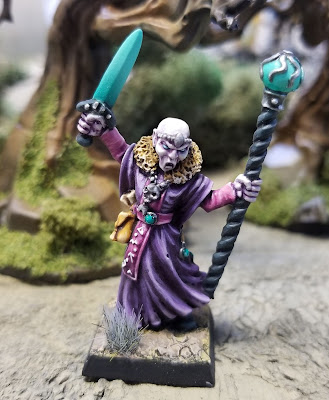 What's on the table?

Plans to expand the army are in progress. First up is a unit of Death Riders led by an undead hero, a unit of 30 zombies - using the amazing Zombies of Karr-Keel, a counts-as Corpse Cart using a Warmonger Skeleton King on War Throne, and of course a Vampire. Once I get all that done I'll pick up a Zombie Dragon as a centerpiece. 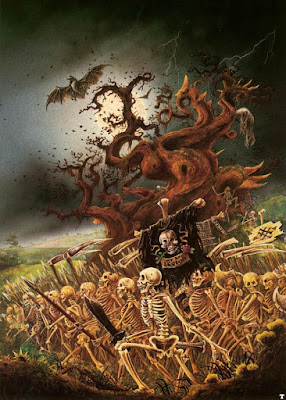 Posted by Bulldoglopez at 4:09 PM