Consult The Book of Armaments!

I don't know if everyone has a certain miniature that is their "holy grail", but I do. I actually did own this figure as a kid, but it was lost in a move or probably tossed out with some other miniatures when I left the house. In any case, I had been keeping an eye out for this particular figure for years. If you're not familiar with this guy, he is the Elites gang leader from the short lived Confrontation line, the precursor to Necromunda. 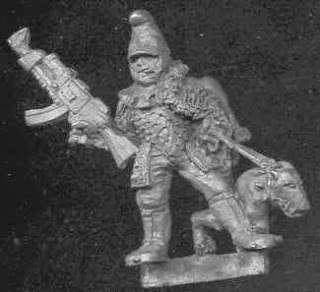 I had largely given up actively searching for this figure since I have so many others to work on and didn't really feel like feeding the Ebay sellers, not that any examples were popping up on Ebay. I arbitrarily posted an inquiry on a trading page and someone responded the same day and we made a deal. I was ecstatic to finally have this figure on the way.

While waiting for the figure to arrive I did a little research on painted examples, which are even harder to find. The only two examples I could find were painted by the esteemed Axiom and notorious Asslessman. Between the two of them, I think they have the best collection of painted Confrontation miniatures anywhere on the internet, check out their blogs if you are not already familiar. If anyone knows of other examples, please hook a brother up. I love these figures. 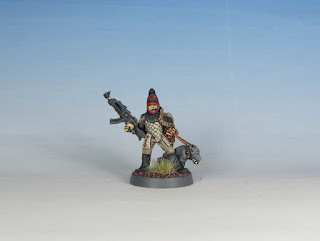 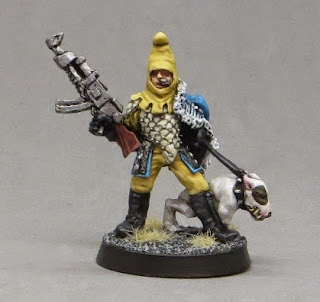 Deciding on a paint scheme took a bit of research and I didn't want to copy what Axiom and Asslessman had already done. I did want to figure to look like a bit of an aristocrat, so I looked at some Napoleonic uniforms for inspiration. Ultimately I settled on a scheme inspired by the world's premier militant aristocrats... The Redcoats!

Nothing says "Leader of men" like white pants paired with a smart red jacket. 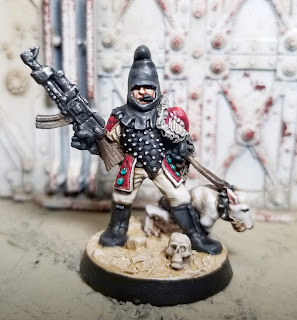 I limited the palette to three colors and used emerald as a spot color on the gems. I really like the gems as they really give this figure a kind of wealth status. The hussar jacket suggests that maybe he is a former Imperial Army officer or some other similar station. One touch I am particularly happy with is that I used a different metal color for the magazine. If you look at pictures of modern combat rifles, the magazines are typically a different color from the rifle. I think it was a nice touch that helps bring out the personality of the figure. Overall, i'm pleased with the end result and look forward to putting him out on the table as a gang or mercenary leader.

Oh and the dog was inspired by none other than you know who.... 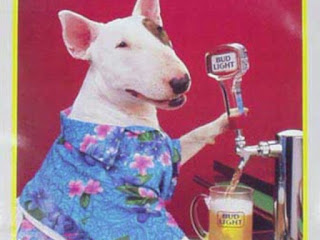 PARTY ON DUDES!
Posted by Bulldoglopez at 4:41 PM